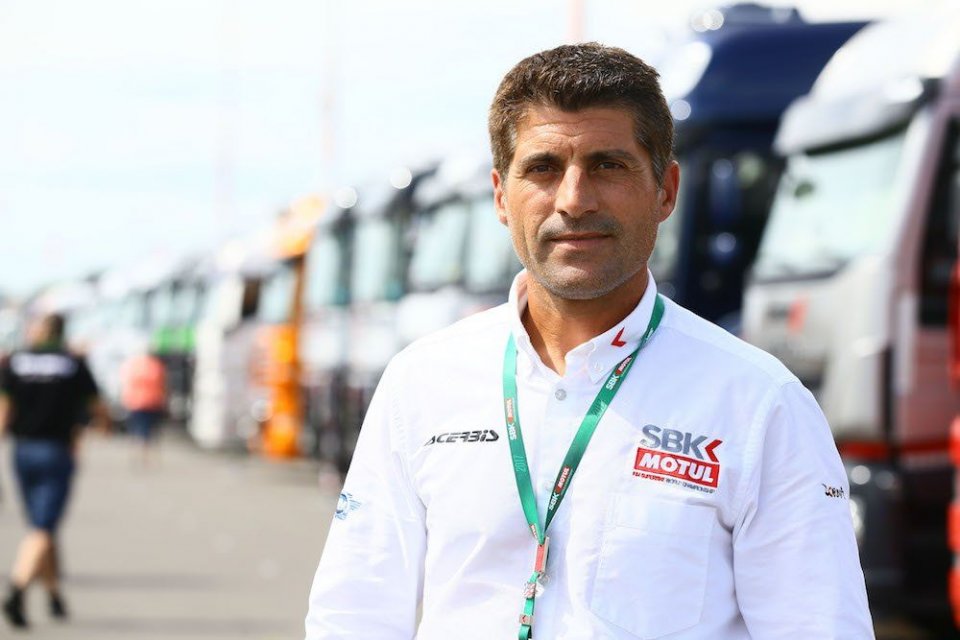 The Barcelona tests that started yesterday morning at the Montmelò circuit are, in fact, a general rehearsal for the post-Covid Superbike World Championship. In addition to the activity on the track, with Scott Redding (Ducati) fastest on day 1 ahead of world champion Jonathan Rea (Kawasaki), this two-day Catalan race will be useful for the teams and organizers to develop the anti-contagion norms that will be used throughout the rest of the season.

The championship will officially start again on July 31st with the first free practice in Jerez and will continue at least until the Magny-Cours round in early October. The teams and fans would like a few more dates with Assen, Donington and Misano which seem to be the ideal candidates for the eighth round of 2020.

"In Misano they don't know if they will have the possibility to make any receipts (deriving from the sale of tickets, Ed.) - said Gregorio Lavilla, boss of SBK in an exclusive interview - At the moment we are talking to many circuits that have asked for some time to evaluate the situation, in any case before Jerez we will have to confirm the eventual second part of the championship because in this way the teams will be able to organize their work in the best possible way. In recent months we have seen that some do things one way and others in another way. For a circuit, holding a GP without a public is difficult and in recent months some tracks have made themselves available. It is in these moments that we see the best and worst of everyone ”.

Gregorio, we are finally back in the paddock after the great three races of Phillip Island. How important is it for Dorna that the SBK gets immediately back on track?

“It is really important to be here today, it is fundamental for the entire movement. There is a great desire to start again with the races, the coronavirus was an experience that we hope will remain unique and at the moment it is not over yet, we must be careful and comply with all the safety rules. A lot of things have changed in the world and now everyone needs a reset ”.

At the circuit entrance, everyone had their temperature checked today, we had to fill in certification forms in the past few days and in the paddock, there are masks and sanitizers everywhere. How important is compliance with these regulations for the continuation of the championship?

“The rules are everything at the moment. Now we have to manage the infections, and everyone must do their part to avoid another lockdown. I say this as a citizen, as a lover of this sport and as an executive who wants the teams to be able to do the season for all the families who live thanks to the work of the paddock. Now we are trying to salvage this difficult situation, in recent months I have received a lot of calls from my collaborators, from the teams, from the partners to know what would have been done and a lot of times I had to answer that, honestly, I did not know. "

Speaking of Dorna, how much damage has Covid done to the company that organizes the world championships?

“For Dorna doing or not doing the championship would have changed nothing from an economic point of view. The damage has been done now but fortunately ours is a solid company with a strong investment capacity and we wanted to resume the championship for all our partners and for all the teams, for which, however, it was essential to return to work. We don't want the championship to die today, we want it to go on for many years. "

One condition for the championship not to stop is the correct compliance with all the anti-contagion rules. But what if by chance there should be positive cases in the paddock?

“In that case we might have to stop, and all go home, it's not what we want but it's a possibility. There was also the possibility of not starting the world championship, we took it into consideration together with that of restarting immediately, if the pandemic had not exploded or would have been resolved quickly, or doing everything gradually which is what that we are trying today. "

Are you worried about all this?

"What worries me is that there are those people who do not respect the rules and who risk blowing up everything that has been organized by those who, like us, have done everything and are doing everything correctly. Everyone has a responsibility in this particular situation, and everyone has to take it seriously. It is better to use masks than not be at an event like this. We must follow what the authorities tell us. "

Last week there was the first weekend of Formula 1 races at the Red Bull Ring in Barcelona. All drivers and insiders were tested with the serological and swabs. Will you do it too?

"You have to understand which tests are valid and which are not, but if there is no total isolation, the test is only used to see how you are at that moment, beyond its own symptomatology which is however important. Now the fundamental thing is social distancing and the use of personal protective equipment. For our part, inside the paddock, we will try to control and minimize the risks, but we cannot control what people will do between Jerez and Portimao. "

26 full-time riders are set to compete in the second season of the NTC, representing 10 different countries from across northern, central and eastern...
6 hours 31 min ago

Goodbye to flags, which are often not very visible, and goodbye to illuminated panels, which require FIM approval
10 hours 38 min ago

The young Texan, 2020 MotoAmerica Mini Cup by Motul 110cc and 160cc champion will race in the Spanish national championship next season
1 day 10 hours ago