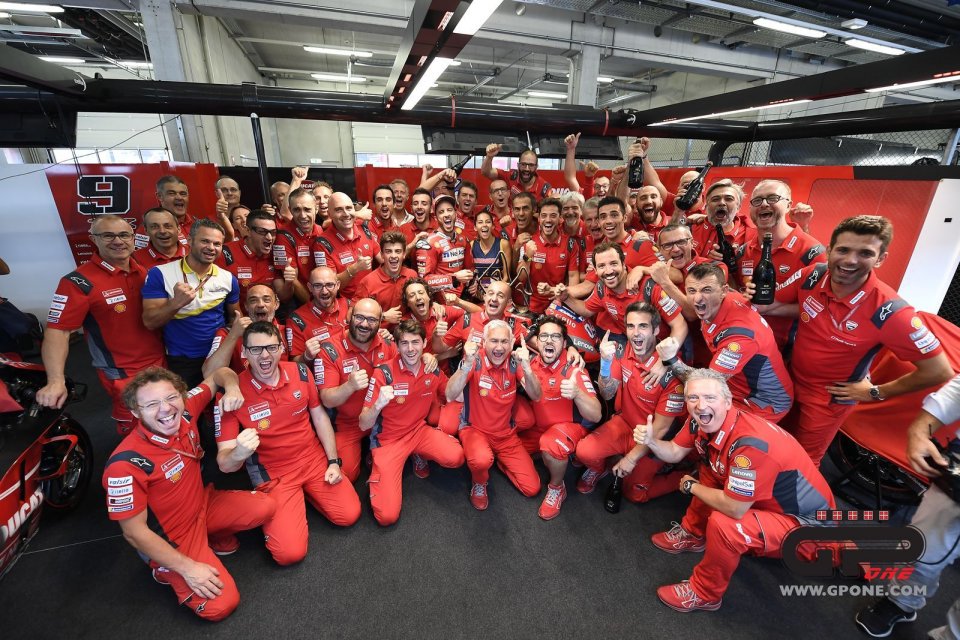 Two Dynamo Dresden football players have been found positive for Covid-19. The result is that the entire team has been placed in quarantine and the match that should have been played against Hannover on May 17 has been postponed.

A few days ago Chancellor Angela Merkel had given the green light for the restart of football in Germany "as long as everything happens with the maximum safety", thus pandering to the wish of championship leaders, Bayern Munich.

Why are we talking about football? Well, simply because it is basically the most practiced and followed sport in Europe and perhaps in the rest of the world and its restart is certainly to be considered a positive sign.

Even though we are talking about events that are certainly easier to organize than a MotoGP Grand Prix, with the counterpoint of it being a 'contact' sport. Something that motorcycling is most definitely not.

The case of Dynamo Dresden, however, draws attention to what is probably the biggest problem after the go-ahead given by the various governments for the reopening of competition: the possibility of contagion within groups.

Unfortunately, at the moment not all countries can boast the numbers of Germany, where they have been training for a month and the number of deaths from coronaviruses is about 7,000 out of 170,000 cases, compared to over 25 thousand in Great Britain, Italy, Spain and France.

Yet this is not the problem today. The problem instead is - once the difficult problems of getting the World Championship circus to regroup in Jerez on July 15 for the pre-test have been resolved - what protocol to apply to those present to avoid contagion.

Swabs for everyone, but will they be there?

Let’s take it for granted that it will be mandatory to undergo repeated swab testing, but how often? The next question is: will it be possible to repeat them?

Although Dorna has declared that it has already purchased 10,000 kits, these will only be enough for the first two Grand Prix races. And it’s only repeating tests that can lead to lower risks. Without, of course, arriving at zero risk.

This is the first question.

The second concerns, of course, what will happen if someone tests positive. The crux of the matter is this: if even one mechanic should be found to be positive, will the whole team be quarantined or not? And possibly: the riders too? Both of the riders or only the one from the mechanic's team?

This is not a small matter. And the answer is not clear-cut. In Italy, the Technical/Scientific Committee says that everyone who has come into contact with an infected person must go to quarantine. Taking things to an absurd limit, this even means the opponents. In Germany, however, for the Bundesliga this is not automatic.

The organization: in seclusion at the Grand Prix

A third point is the organization at the circuit: the teams must, as far as possible, seclude themselves away in ‘watertight’ compartments. Avoid any contact as much as possible. And of course this will also concern Dorna staff, both the men called to act as liaison with the teams, and the video production teams. That means interviews from a safe distance etc. The reason for the temporary halt to the presence of the media is clear: our modus operandi - frequent contacts with everyone - is precisely what facilitates the spread of the virus more than anything else.

Without forgetting that the risk of contagion also exists in the Race Direction, because any contagion and subsequent quarantine would actually wipe out the head of the organization.

All groups of people involved: therefore teams (divided by rider), video staff, Race Direction, management groups, must therefore behave as if they were in seclusion, avoiding contact with other groups. Only in this way can the risk of occasional infection be avoided. The individual groups must therefore be watertight and impermeable...

In the case of the first couple of Grand Prix races, the ones to be held at Jerez, it will mean arriving in Andalusia on 14 July and leaving again on 27.

And speaking of a restart: first there are the trips. During our video interview Carmelo Ezpeleta spoke clearly about the possibility of moving with one's own means, that is, by car.

This will mainly be the case for the races in Spain for Dorna and it would solve a lot of problems for the organization. The other possibility is charter flights, even if in this case the separation criterion would not be met, with the result of greater problems in the case of a positive test for a single individual.

Moreover, in the case of the use of one’s own means of transport, in long journeys it would be difficult not to stop for physiological needs. Each solution actually brings with it a number of other problems.

Which nations will really accept the Grands Prix?

There is no answer to this question yet. The various governments must each give their own verdict, which includes respect for protocols that can (and will) certainly not be univocal.

We will have to see the evolution of the contagion in the various nations. Even in view of the time available. For example, currently in Malaysia, which might host a Grand Prix at the end of the year, there is currently a ban on organizing large events, but will the restriction still be in place in November? No one can tell.

The fact remains whether or not a calendar with 12/13 Grand Prix races, six of which, maybe, in Spain, and the others split between Italy, the Czech Republic, Austria, maybe France and maybe Malaysia, could be considered a world championship?

In 1983 Roberts and Spencer competed in a championship of only 11 Grand Prix races, which however took place in France, Italy, Germany, Spain, Austria, Yugoslavia, Netherlands, Belgium, Great Britain and Sweden. Ten nations.

The Noale manufacturer, currently testing in Qatar, has mounted sensors on the RS-GP that are mainly used in F1
4 hours 57 min ago

“Is the Honda difficult? All MotoGPs are. It depends on the rider. Tonight my head will work a lot, and tomorrow it’ll be better.”
11 hours 33 min ago