During this period, when everything is at a standstill, Valentino Rossi has time to rummage through his memories, thanks to a career that has not only been very long, but also full of memorable moments. In an interview with BT Sport (watch it by clicking on the image above), he drew up a personal ranking of his victories.

Great victories but also great opponents, and the Doctor thanked them, in a way.

“I've had great battles with Sete Gibernau, Max Biaggi, and Jorge Lorenzo. "Rivals like them are the fuel you need to raise your level. You give your best to get ahead. It also becomes something personal," he said.

Of course, everyone remembers the Laguna Seca race with the iconic (and controversial) overtaking at the Corkscrew.

“That race was special," Valentino remembered. "Stoner was very, very strong at that time, and he beat me in 2007, winning the title with Ducati, while I had lost the World Championship for two years in a row. In 2008, I had switched from Michelin tires to Bridgestone, and the battle with Stoner started from the very first race. That was a crucial weekend. Casey was incredibly fast with the Ducati on that track. After the tests, I was second but far from him. The night before the race, I had spoken with Uccio. We told each other that it was very important to beat him. I thought the key was to stay ahead and set my pace for the race. I tried, and it was a furious fight, but I won it."

Rossi realized how absolutely valuable his opponent was.

"I had a lot of fun battling it out with Casey. He's one of the best talents of the last MotoGP period," Rossi said. "He was young, fast. He was one of my strongest rivals ever." 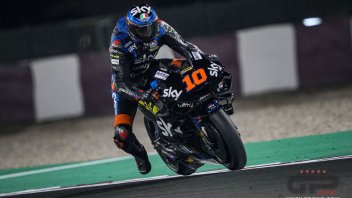