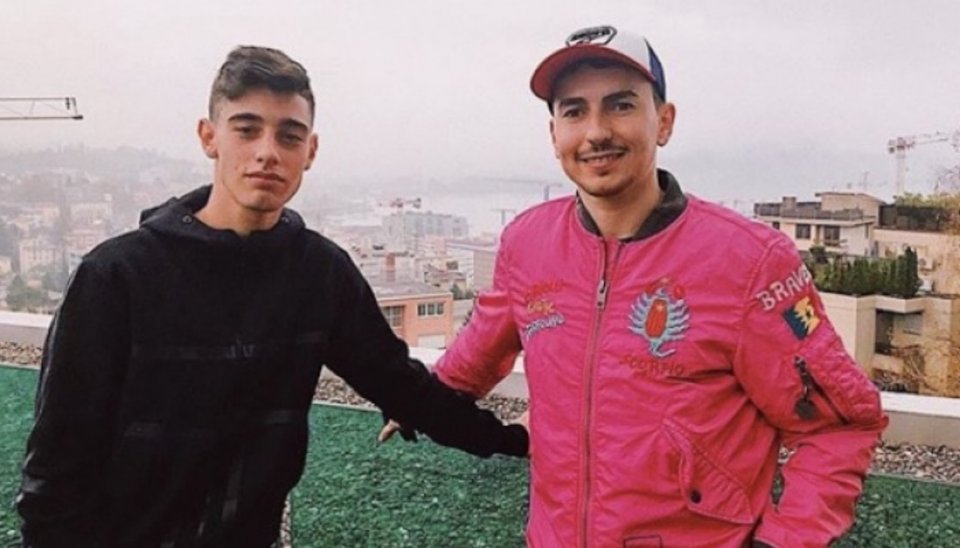 Without MotoGP, stuck at home because of the coronavirus, the inaugural weekend at Losail will focus on the smaller classes, with Moto2 and Moto3 making every effort possible to put on a great show for the general public who as a rule follow the premier class with more interest.

A great opportunity, therefore, for the riders, especially in Moto3 who will be aiming to take over at the top from Lorenzo Dalla Porta, now in Moto2 with Italtrans. During the traditional Thursday press conference, the top three riders in the winter tests spoke: Salac, Ogura and Arbolino.

Tony Arbolino ended the Qatar test in third place but, by all accounts, he is the number one candidate for victory in the world championship. The unknown factors will be how he manages the pressure and how he will go against KTM.

“Moto3 is very difficult to predict - said Tony - I don’t feel any particular pressure because I have prepared for the season. I want to fight to win every race to bring home as many points as possible and in the last few races we will see where I will be in the standings. At the start of the tests I was a bit worried because everyone said that the KTM would be a good bike but at the moment there is no such problem even if we have to see how things go in the race. The Honda is a fantastic bike and is currently better than the KTM."

What sort of weekend will it be without MotoGP?

"It certainly loses a bit of magic, but we will still compete at our best. It is all a bit strange in the paddock, but I know that the riders are watching us and like them everyone else who didn’t manage to get here."

Many observers have predicted you will win the world title, also because of the splendid championship you had in 2019, competing on equal terms for most of the season with Dalla Porta and Canet.

“Last year was an incredible season with 7 podiums and a lot of pole positions. I have a good base and I did a lot of laps on my own and with a good pace in the test, but I didn't do a time attack. This can certainly be a positive year because of the work done in 2019; the bike hasn't changed much, and I feel ready for battle."

You are still in the same team but instead of Romano Fenati, who has moved to Max Biaggi's team, you will have Filip Salac by your side. He ended the winter tests in first place, did you expect him to be so fast?

“Yes, I want a fast rider alongside, Salac is and he is doing a good job. He made a good time attack during the tests and I hope we can collaborate during the year as slipstreaming gives you a big advantage in our category."

You are very close to Jorge Lorenzo and today the Majorcan has announced that he will be at the start of the Barcelona GP as a Yamaha wild card, do you think that he’s ready for the challenge?

"I haven't seen him for some time because he's been on vacation lately and I'm a bit envious. Today he announced he would do a wild card in Barcelona and so I'm sure he can do a good result and be competitive. After this race in Losail we will have a month off and I will go back to Lugano to train, it’s still a bit cold but I will still try to go on the bike".

His new teammate Filip Salac was at the press conference alongside Tony, back from a year with the Prustel team which ended with a 5th place in the Valencia GP. Now he has a new opportunity to show his potential in a top team of the category.

Salac: "The goal is the podium"

“I'm in one of the best teams in the championship and if last year my goal was to score some points, now it's to get on the podium. The transition from the KTM to the Honda was important but positive, it was difficult at the beginning but already in Jerez I had set a good time doing my strategy and not following the others. For this I have to thank the team".

Ogura: "I don't feel inferior to Arbolino and the top teams"

The second placed rider in the Losail tests also attended the conference: Ai Ogura, who with the Honda of the Asia team finished the 2019 championship tenth in the standings, however producing a good series of convincing performances that culminated in fourth place in the Malaysian race.

“I was very happy to finish the tests in the top 3 - said Ai Ogura at the conference - I didn't expect to be so fast but I made some changes to the bike and it went well. Normally I struggle at circuits like this, but I managed to keep up with the pace of the best."

Compared to 2019, this year Ogura will know the circuits of the World Championship like his opponents. Will this help him be more competitive?

“Maybe knowing the tracks will allow me to fight for the championship even though Tony and the Leopard and SIC58 teams are going really well. But I don't feel inferior to them and I will try to improve even more during this season".

The decision was reached because the races are concurrently scheduled with the World Endurance Championship in which Mike di Meglio races.
19 hours 4 min ago