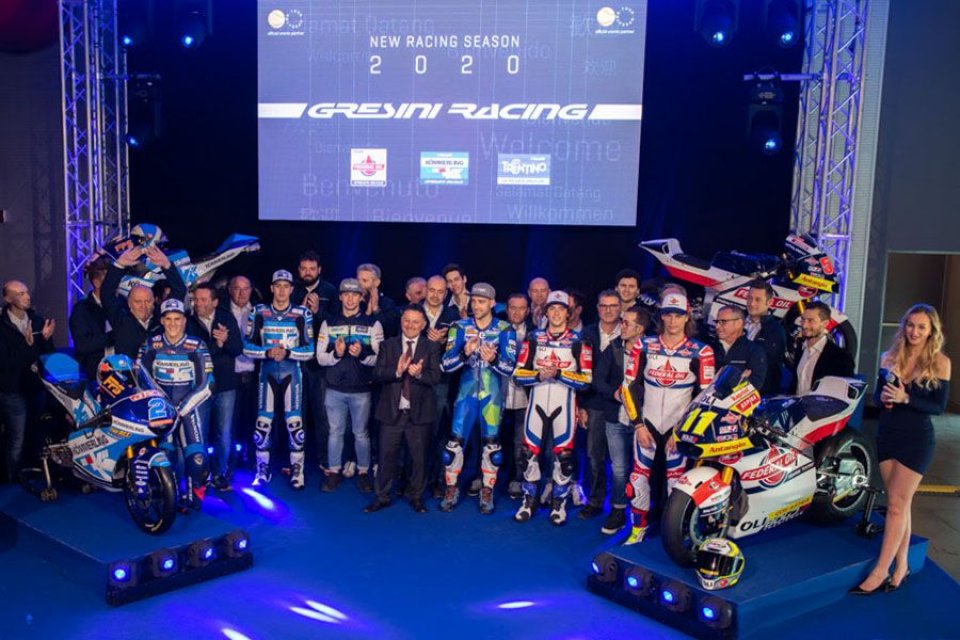 Calling it a team seems almost an understatement, because Gresini Racing is a real two-wheel battleship. Starting from MotoGP to CIV, passing through Moto3, Moto2 and MotoE, there is no class where the team founded by Fausto Gresini is not present.

A lot of commitments but also satisfaction that the ex-racer wants to repeat in 2020. In Moto3 he will try to aim for the title again, in MotoE he will defend the one conquered last year by Ferrari, in Moto2 he will field two bikes, with Bulega as the number 1 rider. You can almost lose count of where Gresini is involved…

Fausto, where do we start? From MotoGP with Aprilia?

"After trying the new bike, Aleix Espargarò stopped in the pits with tears in his eyes ... not out of desperation but for the pleasure of finding what he had wanted".

It was an encouraging debut in Sepang…

“As soon as the bike got on the track, it went better than the 2019 one and that’s certainly a good sign. There is undoubtedly still a lot of work to do, as the project is still young, but the start was good, and I hope to have good results in this category too. Of course, we all want to see Aprilia on the podium"

It is not the only category where you are aiming for something else. In Moto2 you’re starting from Bulega.

“I found a motivated guy with a great desire to get involved, he also already has a year of experience in Moto2. I think being in the Academy did him good but probably a phase of his life ended, and he needed a change. I'm glad he chose us because I expect to do well with him."

Have you seen a change in him in these months?

"He needed a change and there is always an intermediate phase in which you have to do things first and digest them and then feel free. I think the new phase for him is starting now”.

In a team that is doubling up, this year you will field two riders also in Moto2.

“It wasn't an obvious and easy thing, but we did it. Edgar Pons' arrival is also important, he is young, and he too has won the CEV. In the tests he went well, I'm happy to have a young team and full of desire, that’s how you build results".

“We are champions and we have the champion; we simply have to defend it. I’d like to carry on this project with Matteo and we are evaluating the possibility of doing tests with him and maybe even some wild cards in Moto2. I’d also like to give Zaccone a chance to show his ability, I think it's one of the objectives of this category”.

In Moto3 you continue to put your faith in Rodrigo, why?

“The choice of Gabri was something we strongly desired because I think he was very unfortunate last season and the results did not reflect his potential at all. I asked him to renew with us, he was surprised, but I think he has the qualities to fight with the best in the category".

“It came about naturally because we were looking for a young rider and he is the reigning CEV champion. Obviously, he will need a period to adapt because he has changed teams and bikes, going from KTM to Honda. They are all elements that do not help at the beginning, but I am sure that in a short time he will be competitive with the others."