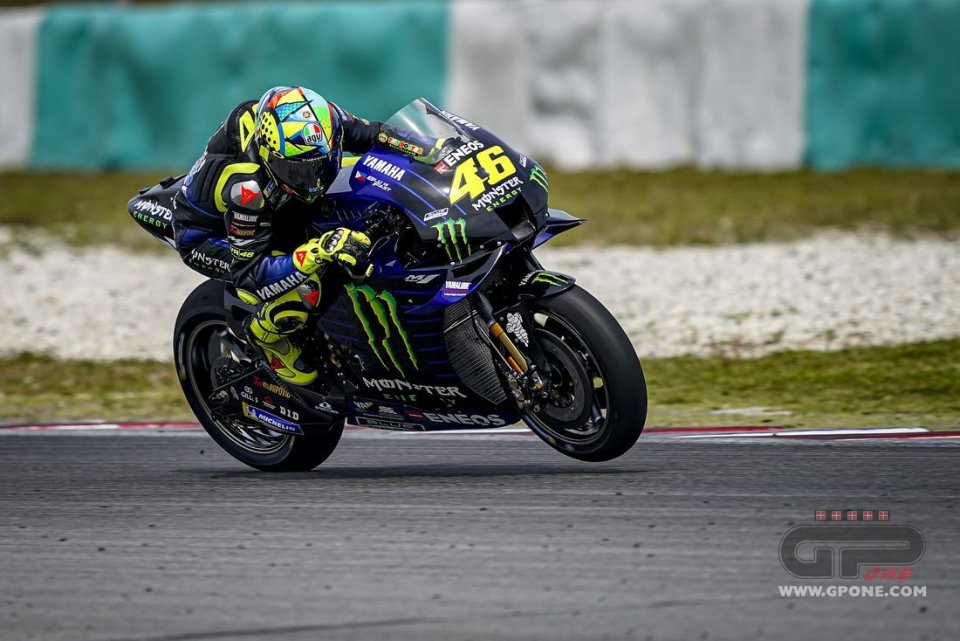 Valentino took his first step towards seeking the competitiveness he's lost. The 1'58"41 he saw on the dashboard of his Yamaha is his personal best in Sepang, and it got him a 5th final time. The Doctor was satisfied, and his upcoming 41st birthday doesn't seem to bother him much.

“I've been testing here ever since they opened this circuit," he said jokingly. "The current MotoGP bikes require more effort. If I were to ride like I used to years ago, I'd be going too slow. The bikes have improved, the tires have improved, and you have to look at things in a different way. Of course, the older you get, the harder it gets, and this test is the most difficult of the season. It's tough even for young riders, but I trained a lot during the winter, and I'm in better shape than last year."

Do you still have fun?

"These MotoGP bikes are the most fun I've ever ridden. The bikes were more more difficult before, so you had to have technical finesse, while now courage counts a lot.”

Are you satisfied with these tests?

“I'm happy with these three days of testing. Today I managed to ride in Sepang at 1'58" for the first time, and it's positive for me because I'm 5th and not far from the best. I also worked a lot on the race pace and tested lots of things, some positive and some negative. We have to continue because everyone is very fast."

Where has Yamaha improved?

“The sensations are positive because it seems we've found a better grip, and we've been able to decrease wear on the rear tire, which was our biggest problem. But we've only tested on one track, and we'll have to confirm these results on others. The new M1 is a bit different from the 2019, so we still have to understand its full potential."

Are the improvements mainly due to the new project or to the different tires?

“In my opinion, half and half. The new tire works well. Everyone went fast but we're better, since we worked both on the frame and on the engine to achieve this. I can say that the bike has improved.”

“We have progressed. The difference from the best is less than last year, but still not enough. We still have to work on it. Even our rivals have taken steps forward. We have to understand if we'll at least be able to remain in the slipstream of the faster riders on the straight. Before saying this, we'll have to see what the situation is on other tracks and then in the race."

In this sense, are V4 engines unbeatable?

“From what we've seen, the in-line 4 is easier to ride, but a little slower on the straight. This means that you're fast with the V4 on the straight without effort, while you can make a difference with the in-line 4 when cornering, but you also risk more. It's not easy, but this is Yamaha's DNA, and I don't think it'll change."

With these results, is the idea of retiring fading?

“I'm happy with my position and the 5th time. That's how I like it! It took great effort, but I was competitive. This doesn't mean that I'll decide whether to continue or not. I have time and I'm not in a rush."

These tests were still in a trial stage with your new chief mechanic, Munoz. How did it go with him?

“I really like working with David. I have positive feelings, and the mood in the team is very good. We've also gotten some good Italian electronics. From this point-of-view, I'm really happy."

“It seems that, in the current MotoGP, handling the brake motor is important, and we've worked hard on this. We've suffered in the past, but we managed to make improvements thanks to the new guys who deal with the electronics.”

Have you tried the new starting device?

"It's not that bad, but we still have to work on it before we can use it in the race."

So far, you've talked about yourself, but have you managed to get an idea of the numbers on the field?

“The Honda and Marquez's level can't be judged because he's not well, so we'll have to wait. I think that the fastest on the pace were Vinales and Rins, maybe Alex even more than Maverick . The two have always managed to ride in 1'59” low, even in exiting, for about ten laps. As usual, Quartararo was really fast on the flying lap, but he struggled some on the pace, while the Ducati didn't seem very fast. These are more or less the numbers on the field.”

In the latest episode of the series by Vanessa Guerra: the Spanish champion's GP, Oliveira's secrets, a challenge between Nakagami and Alex Marquez
4 hours 57 min ago