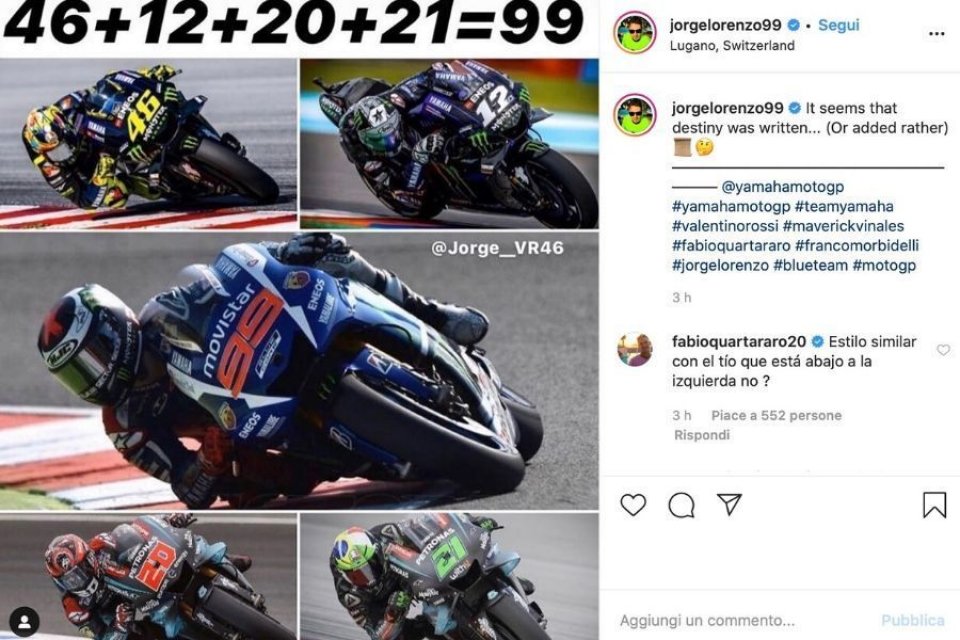 Math is not an opinion, Jorge Lorenzo seems to say. The new Yamaha tester, with a picture on Instagram, pointed out that the sum of the race numbers of all Yamaha drivers gives as a result the 99 of the new tester: the 46 of Valentino, the 12 of Vinales, the 20 of Quartararo and the 21 of Morbidelli.

"It seems that destiny was written". - said Lorenzo, with Fabio Quartararo who commented on the photo saying that the style of the 99 looks very similar to that of the "guy at the bottom left", just Quartararo. Between the two there seems to be a good relationship since in these weeks many messages have been exchanged and they have been protagonists of many jokes about the social, ready to collaborate also on the development of the new M1?

Valentino: “I remember him when he was racing. As a team manager, he was my great rival in the 250 with Capirossi and in the MotoGP with Gibernau and...
1 hour 45 min ago

New sponsor for Franky: the automotive industry is one of the main sectors in which Belotti solutions are applied and have always been appreciated,...
3 days 23 min ago

MotoAmerica and AMA have given the green light to the RS 660 model to compete in the Twins Cup starting next season in compliance with the...
5 days 20 hours ago

For 2021, Herrera will take part in the WorldSSP Challenge, featuring at the European stages of the championship, which currently make up the first...
6 days 56 min ago

Friday, February 27th, at 6 pm, live streaming on the team’s social media channels, but also on GPOne, Facebook, and YouTube: presentation of the...
1 week 20 min ago

Moriwaki won the inaugural Moto2 world championship with Toni Elias: "Toni won riding the MD600, one of the best achievements in Moriwaki's history,...
1 week 23 hours ago