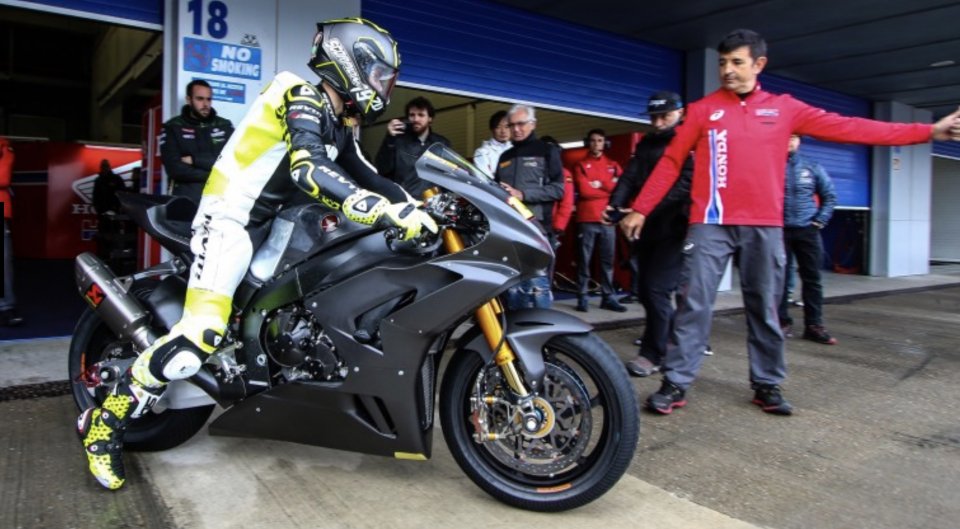 Alvaro Bautista was the focus of attention on this first test day in Jerez. Everyone expected to see a close battle between him and Jonathan Rea, but we were left disappointed. Only a handful of laps for the Spaniard and not even one track exit for the world champion who remained warm in his garage today, going out only to "peek" at the first roll-out of the CBR 1000 Fireblade RR-R, which also came under close scrutiny from Kawasaki technicians.

"We are developing the bike - said Bautista at the end of the day - These conditions certainly don’t help but today I was able to understand the great work done by Honda this winter. We did a few kilometres this morning to collect data because as we are the beginning, we don't have many references."

What are the main differences between the Ducati Panigale V4 you rode last year and this CBR?

“This is a different bike than the ones I have ridden in the past, I have always used the V-engines in SBK and this one is inline. I have to adapt my riding style to the engine and try to understand what the strong points of this layout are. It is difficult to make a comparison between this bike and the Panigale V4, it seems that the biggest difference is the engine design. I've always been used to riding in another way and changing is quite strange. The character is very different. I was surprised by the power, I expected less from that point of view. We have to work to be able to make the best use of it."

With 16 race wins under your belt, what prompted you to leave Ducati for Honda?

“Honda wants to win, and the project was interesting for me. I have been in HRC a lot and this year I have the opportunity to build the bike I need. It is a great job for both me and Honda because the bike is still evolving. Choosing this manufacturer was important for my career, we are only at the beginning of the project".

Today your day was also characterized by a crash. How did it happen?

"I made a mistake in turn 6, I tried to use a lot of engine brake to push but I lost the front. Luckily, there were no consequences."

Have you noticed anything particular in the electronics on this CBR? Especially considering the wet today…

"In the wet, the electronics of this bike are quite normal, I didn't do many laps, but I didn't seem to notice anything special and not even any big problems."

You said Honda is here to win. Did the choice of team members also make a difference?

“The team is new, and we must get to know each other. I'm happy with the people around me but we need more time to understand how to work better especially on race weekends. Those who work in this team have a lot of experience and professionalism, many come from MotoGP ".

Did you talk to Marc Marquez before these tests? He tried the RR-R Fireblade.

“Yes, I spoke to him, he tried the road version and he said he was impressed by the power of the engine; like me, he would have expected less power from this CBR. The road version is very different from the one I rode today but his first impression was positive. He trying the bike helped me to choose."