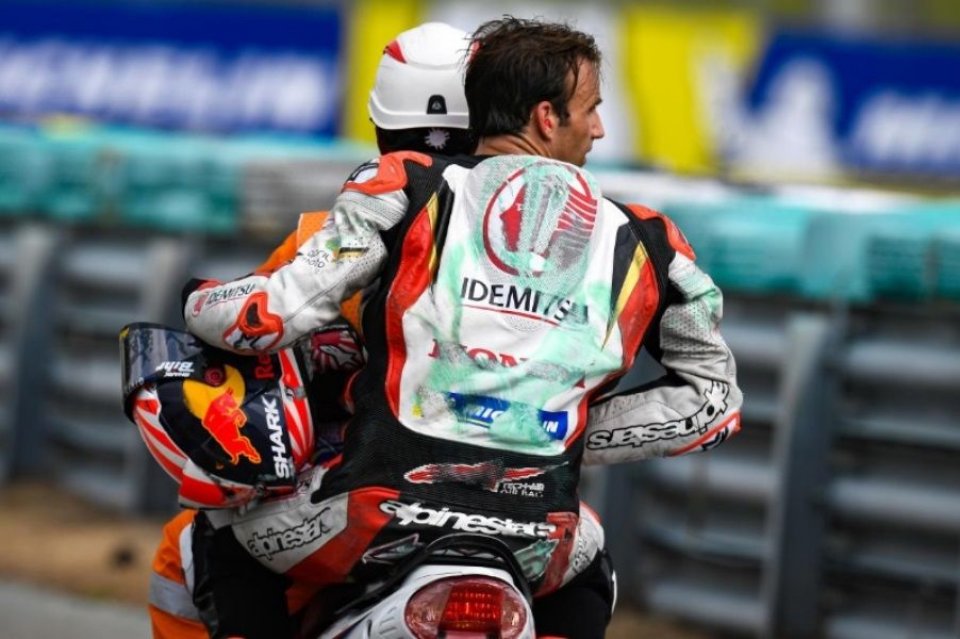 The Valencia GP ended in the worst of ways for Johann Zarco. Besides having fallen, the French rider was even mowed down by the KTM ridden by rookie rider Lecuona. Seeing the first images, everyone feared the worst for the LCR rider but, in the end, a tragedy was averted.

"In the end I was fine ," Johann said. "This accident could have been much worse. I knew it would be a long and hard race for me, but I managed to be fast with worn tires, so that I could keep up with the top ten and be able to fight with Espargarò."

Too bad he slipped.

"It was really too bad. Unfortunately, that slip compromised my race, like happened to Petrucci. Fortunately, I wasn't injured, and that's the most important thing. It's a pity how it ended, even though this experience helped me understand the Honda more, and so many things in my life."

Racing aside, the biggest question is what his future will be.

"At the moment, the doors in the MotoGP are practically closed on every team," Zarco specified. "At this point, I have nothing to lose, so I'll wait. I've already lost a lot in the past, and I can't help but thank Lucio. These three races allowed me to clear several doubts, helping me understand that I'm a rider, despite the fact that people already knew that."

So Zarco tries to see the glass half full.

"It was like a rebirth, since I felt like a sick person before. All this is priceless for me. If I have to stop, I've still found the joy that was missing."

Ducati took a step towards the French rider with the Avintia team, which could also benefit from a bit of help the official team.

"I don't want to make the same mistake I did a year ago,"  Zarco pointed out. "You saw how sad I was when I couldn't be up front fighting with the best. At this point, it's better if I return to the Moto2 for a good challenge."

The simplest track is the one that leads to Marc VDS.

"I think Marc VDS would lose so much if Marquez left. At the moment, Alex in Honda seems to be the most concrete hypothesis."

Moriwaki won the inaugural Moto2 world championship with Toni Elias: "Toni won riding the MD600, one of the best achievements in Moriwaki's history,...
23 hours 14 min ago

The 2018 Supersport 300 champion was injured last September after a crash in Estoril: "Five months seemed like five years"
1 day 20 hours ago