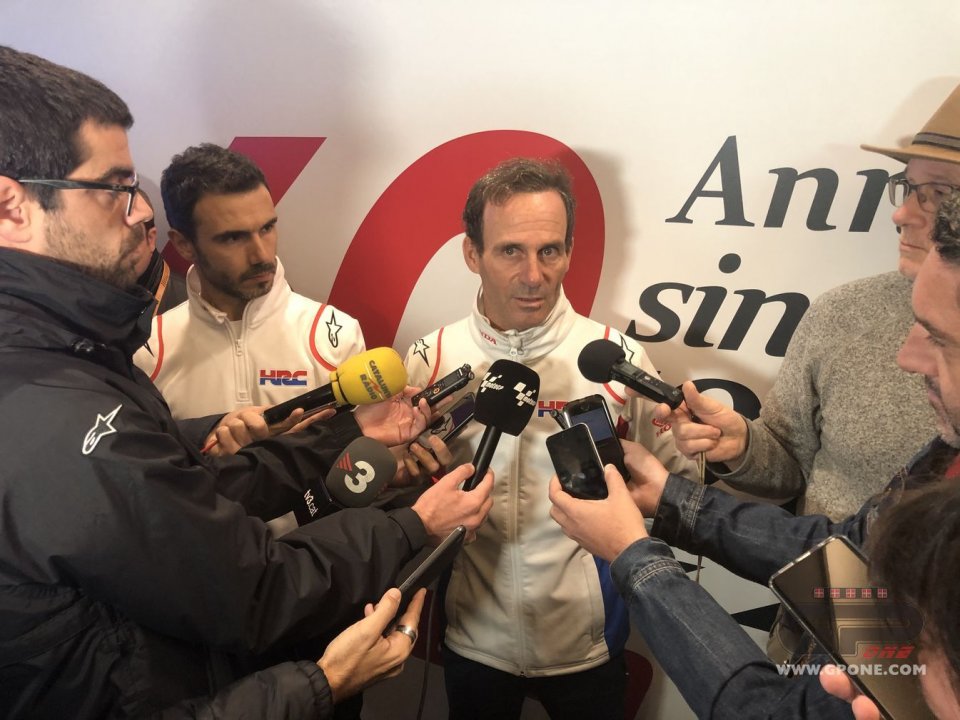 The sun has by now set on the Valencia paddock, but the lights shine on Alberto Puig and his statement formalizing the arrival of Alex Marquez in the Repsol Honda official team, alongside his brother Marc. It's up to the Honda team manager to answer the questions regarding this decision.

"After Lorenzo's decision to retire at the end of the year, we started thinking about who could replace him. We arrived at a decision in the last few hours," he explained.

What were the reasons?

"Because of his results on the track and not because of his last name, I want to be clear. The starting point of our reasoning was that he's the Moto2 world champion. If he weren't, we wouldn't have given him this opportunity. Honda is looking for a rider for the future, and Alex is young."

Isn't it a risk for him to be in direct confrontation because of his brother?

So you had no doubt?

"We think we made the right decision. Like I said, we must not consider his name but the fact that he's a world champion and, as such, he deserves this possibility."

Did you talk to Marc before deciding?

"Marc did not interfer in this decision at all. It's normal that he'd like to have his brother on the same team, but he didn't push in this direction. Our conversations were with Alex and his manager, Emilio Alzamora, not with Marc."

Why only a one-year contract?

"To put him on a par with the other riders. Everyone's contract will expire by the end of 2020."

Won't this put more pressure on him?

"I don't think it's the pressure, but the difficulty in the MotoGP itself. Pressure is something you have to learn to manage when you race a championship. Alex will have to learn many things and improve his level to adapt to the MotoGP, but he's the first to be aware that he'll need time."

Do you think Marc and Alex can become true rivals?

"This is up to them to decide. Without a doubt, this is a particular situation. I don't think there have ever been two brothers in the same team in the MotoGP before. It definitely won't be a distraction for Marc. He only thinks about winning," he laughed.

Will it be difficult to manage two brothers together?

"Honestly, with my personality, I don't really care much," he said. laughing. Every rider, like every person, is different, so you have to treat him in a different way. I know how to best deal with Marc, and I'll try to do the same with Alex."

Have you thought of Crutchlow or Nakagami as a companion for Marc, with Alex in LCR?

"The situation was that the Repsol Honda team was left without a rider. We had to find a replacement for our team, not for others."

Which bike will Alex try tomorrow and with which team?

"He'll try the 2019 version of the RC213V, and he'll do it with Lucio Cecchinello's structure. From an operative viewpoint, it's the optimal situation because Marquez will try the 2020 prototype and Stefan Bradl will do the same with the team that was Lorenzo's."

He will be replaced by Dominique Aegerter on the NTS. Jesko: "After ten minutes of effort, I'm exhausted and I see black spots,"
1 day 19 hours ago

No Fans at Washington Track Due to COVID-19 Restrictions. The Ridge Motorsports Park will be offering 2020 ticket holders the option to either...
2 days 15 hours ago

First weekend of racing for the 300 category that gave us two exciting and very tight races. Championship standings congested with Carrasco in 4th...
4 days 14 hours ago

Antonellini: “We knew we were in the wrong, and we were ready to pay a fine, the expulsion is excessive. I myself have seen Dorna's men without masks...
4 days 20 hours ago

The rising star of the MotoGP is a fellow citizen of the mayor of Nice, Estrosi, who received as a gift yesterday the Pernod with which he competed...
5 days 23 hours ago

"It's great to go back to racing after watching the MotoGP races. In the heat I had problems in the Barcelona tests so this morning I tried something...
6 days 15 hours ago