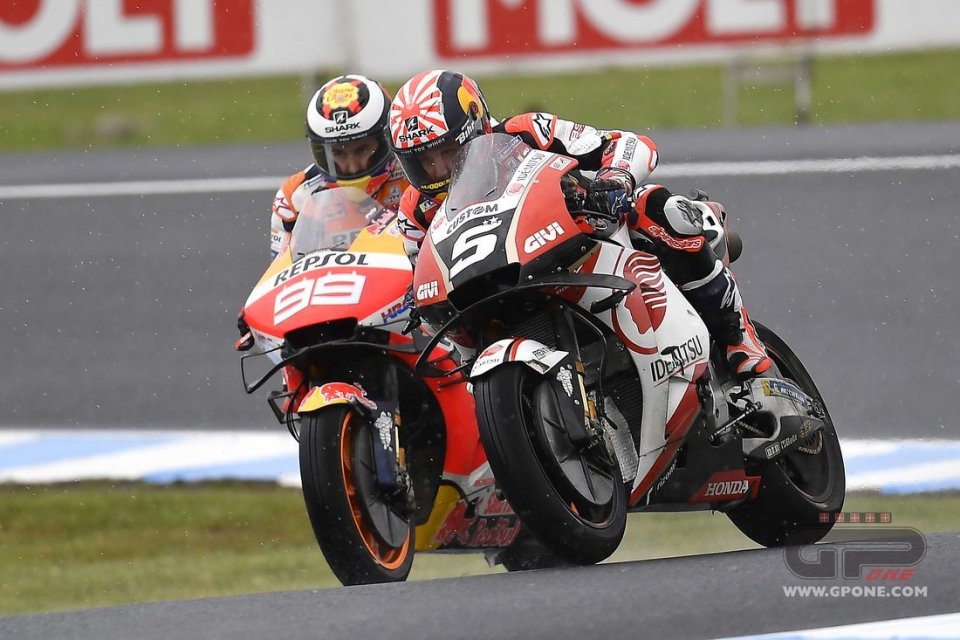 Aside from Maverick Vinales on the Yamaha, the pacesetter on Friday, the spotlight at Phillip Island has largely shone on Johann Zarco. The Frenchman began his adventure with the team LCR Honda in FP1 and by the end of the day he was lying 15th, just a second and a half from the front.

Despite the gap, Zarco sees the glass half full.

“It wasn't easy to understand the bike in the wet during FP1. It was a useful session anyway as I was able to start building confidence with the bike, also because the pace wasn't particularly quick. With the low temperatures I was quite nervous but not particularly slowl. And then I was able to build confidence and start to push”.

The Frenchman doesn't hide his limitations.

“I was very slow through the turns, I don't deny it. Corner speed is fundamental at this track. As you know, I started well back but in the final 20 minutes I already showed to have better pace”.

“The aim is to find confidence with the bike and at the same time try to get back to my previous level. I might be a good rider, a fast rider, but there is a difference between being a good rider and a top rider”.

The Frenchman talks more about this aspect.

“Right now I'm a rookie with the Honda, as it's my first time, but my aim is to be a top rider. The KTM? I don't want to draw comparisons, I just want to focus on the Honda”.

His apprenticeship has begun and Zarco doesn't want to make any false moves.

“I struggled more in the afternoon, in the dry, also because I started slowly. I need to find that confidence wiht the bike before I can take it to the limit of course. As I've said, the limit is still far off and so it's up to me to make the effort”.

“If I can get the bike to turn as I want, then the lap times will come. As Marquez said yesterday, the priority is to find the right confidence with the bike, that counts more than lap times, which then come as a result. Overall, I'm feeling positive because step by step I'm getting to know the bike, which is the goal. I'm mid-field today and that's not bad”.

Lastly, he talks about the bike and the kind of physical riding it requires.

“I'm not a rider who rides in a particularly physical way. If you have the right confidence you save yourself a lot of effort on the bike. I'm lacking that of course, but I'm not far from the top ten, which is the goal I've set myself”.

Riding the VisionTrack PBM Ducati V4R, the Australian won his second career laurel in the UK’s domestic championship at the end of an exciting season...
6 hours 47 min ago