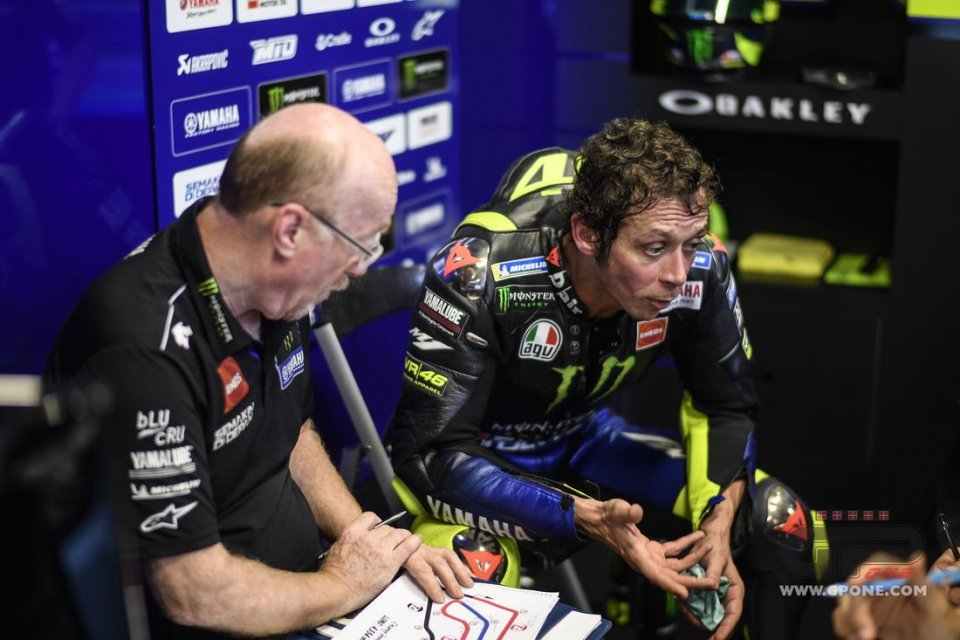 Even the greatest experts can make mistakes and many did so during qualifying, rookie Quartararo, but also Marquez and veteran Valentino. All in the same place no less, or rather at the infamous turn5. While this didn't compromise the session for Fabio and Marc, the same can't be said for Rossi.

The Doctor looked like he was on for a place on the front two rows, but he will instead be settling for the third in tomorrow's race. Noth the best position when you want to aim high.

“unfortunately I made a mistake with the first tyre - he admits - That's a critical corner because there are a lot of dips, but I think I entered a little wide and lost the front. A pity because I had the potential to do better. My pace in FP4 was good and I wanted to start inside the top five”.

Valentino was nevertheless able to return to the garage and head out for a final attempt. But it didn't go particularly well.

“I had time to get out on the second bike, but it was a bit different to the first and I didn't have the same tyres. In the end, I'll start from the third row and this means it'll all be more difficult, but I have good pace and hope it didn't rain. I'll try my best”.

As the Doctor says, it was a pity because the Yamahas have been consistenly quick at Buriram. A situation we've also seen in recent rounds, in practice at least because the race has always got away from them.

“We were also fast here last year. The bike now rides well and we have been able to improve acceleration thanks to work on the electronics, but Honda and Ducati are still stronger because they can be fast without overly stressing the reat tyre, and that's very important in the race. It's no coincidence that the Yamahas are quick in practice and then struggle more in the race, we need to work in that area”.

As for tyres, Valentino made an unusual choice in FP4, opting to use the soft front tyres.

“i get on well with the soft and wanted to use it for 15, 16 laps to understand how it would behave in the race. If offers good grip, but I'll decide tomorrow because the hard is also good, it will depend on track conditions and the temperatures. The decision's still to be made”.

And it needs to be made carefully, because Rossi will be playing catch-up. Not easy given the M1's lack of top speed.

“At this track you can theoretically pass along the straight, but not in our case. It's more likely that the others will pass us- he only half jokes - But I'm quite fast in terms of my pace. It'll be a good fight because I'm starting behind the Ducatis of Dovizioso, Petrucci and Miller and they'll be tough. Morbidelli's not going bad, and also the Suzukis of Rins and Mir, there'll be a good group of us”.

For now, the podium seems out of the question.

“It looks like Quartararo, Vinales and Marquez have better pace . If the start is as normal, they might try and break away”.

Quartararo is now only a rookie in name and Rossi is quick to underline the Frenchman's talent.

“Fabio is impressive this season, I knew he'd be fast because he had already done something special at 15, but no one thought he'd be this fast. He makes no mistakes and could be really strong in future. He rides the Yamaha really well because he has a smooth style and is effective in terms of his braking”.

A likely frontrunner tomorrow. And if it rains?

“This morning I didn't do badly in the wet but I wasn't perfectly sorted either. I think the values remain more or less the same anyway" concludes Valentino.