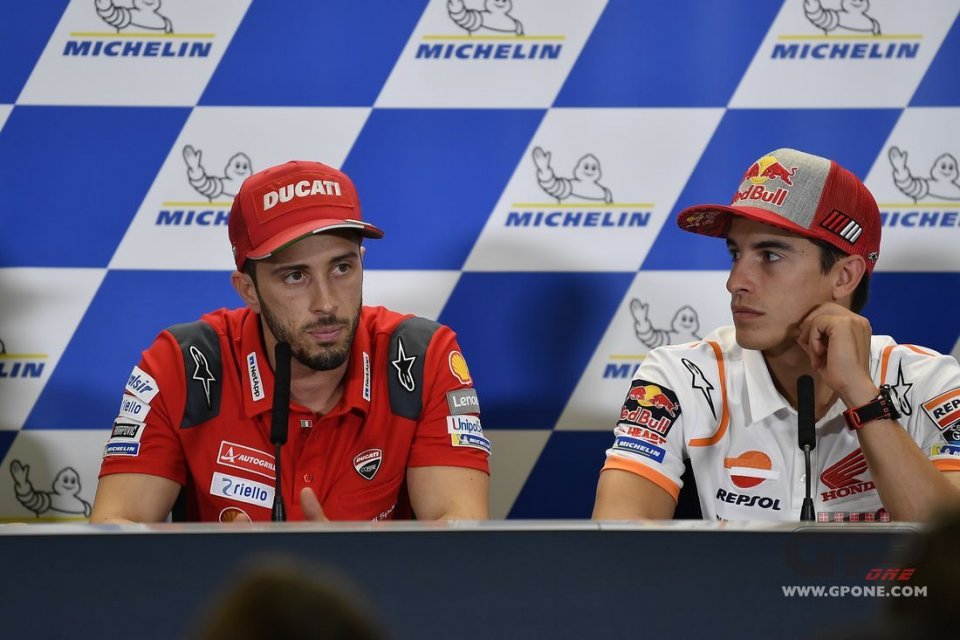 Sometimes silence is worth a thousand words. Especially when it's a silence made up of insinuations that look like a finger pointing at the other side. The silence was Dovizioso's today at Aragon. When pressed on the future of Ducati, he just smiled and closed the door: "You're asking interesting questions, but I wouldn't give you the answer you'd like."

What were those questions? The first was if they were following his indications for developing the Desmosedici 2020 in Borgo Panigale: "They're thinking about it," was the answer.

Andrea is usually not so terse, but the other answer, regarding the mood in Ducati, wasn't much more detailed: "Everything's good," which was accompanied by an ambiguous smile.

Actually, the mood in Ducati's garage this year faltered a bit. After his disastrous race at the Sachsenring, the rider from Forlì snapped. "I've been saying that Ducati hasn't been racing well for years. Let's concentrate on this problem and solve it. If it'll take a year, let's do it."

The summer break didn't help to improve the mood. The meetings between Ducati and Lorenzo, regarding the latter's return to the Pramac team, didn't please Dovi much.

Then Dall'Igna, declared: "My job is to also take the best riders available, and it was my duty to verify certain possibilities."

After these episodes, rumors began to circulate in the paddock about a rift between Andrea and Dall'Igna. And it seemed like something was still smoldering Thursday in Aragon. Just when union should be strength.

Instead, all is quiet. Not only with Dovizioso, but also with the innovations for the new Desmosedici. If Honda and Yamaha are already projected towards the future, the new prototype has not yet been released from Borgo Panigale.

Andrea would like more work done on the frame to eliminate understeering, which has now become the Desmosedici's sort of original sin. Easy to say but hard to do, and in-house squabbles don't help.

The alternative, however, is to settle for another second place in the championship. "Which is still important," said Andrea, without much conviction.

They must reverse course and all row on the same side. Dovizioso didn't talk much, but he hopes the message reached its destination.

Moriwaki won the inaugural Moto2 world championship with Toni Elias: "Toni won riding the MD600, one of the best achievements in Moriwaki's history,...
23 hours 14 min ago

The 2018 Supersport 300 champion was injured last September after a crash in Estoril: "Five months seemed like five years"
1 day 20 hours ago