The second and final day of tests in Portimao also ended for the Superbike, and there are certainly lots of interesting ideas for the Portuguese round (scheduled in two weeks). In fact, the rankings in the field seem to have changed, and it seems like it'll be a bit harder to predict the winner.

Closing the second day in front of everyone was Alex Lowes, who was able to further lower the track record by stopping the clock at a time of 1'41"153 and, consequently, being the fastest of the two days of testing. The British rider showed his stuff at an important moment for him given that, as we all know, n.22 will not be reconfirmed by the Yamaha official team and is in search of a bike.

Behind him, as usual, was Jonathan Rea. The leader collected two tenths at the end of the day from Lowes, but proved to be ready to occupy at least one place on the podium in two weeks, consolidating his advantage and winning his fifth consecutive title.

The signs are undoubtedly positive since, on the other side of the ring, Alvaro Bautista is far from fit. The Ducati rider was not brilliant in the morning session, and he didn't even get on the track in the afternoon because of the recurring pain caused by the shoulder he injured at Laguna Seca, closing the day with a 9th place. His presence two weeks away is not at risk, but his physical condition is not perfect.

Toprak Razgatlioglu also didn't participate in the afternoon, since he came down with an intestinal virus that knocked him out. The Turkish rider was still third in the combination, thanks to his time in the morning, distant less than three tenths from Lowes. But Toprak can still smile seeing today's rankings, since there are five Yamahas in the top five, with Van Der Mark and Baz fourth and fifth.

Sandro Cortese's seventh place was also positive, despite Marco Melandri's 13th place, while they're hardly smiling at Ducati. The fastest of the day was Eugene Laverty (+0.902), who was able to precede the trail of his teammates that included Bautista, Rinaldi, and Davies, the first rider to collect a second ahead of a rather dull Tom Sykes, who only came in 12th. 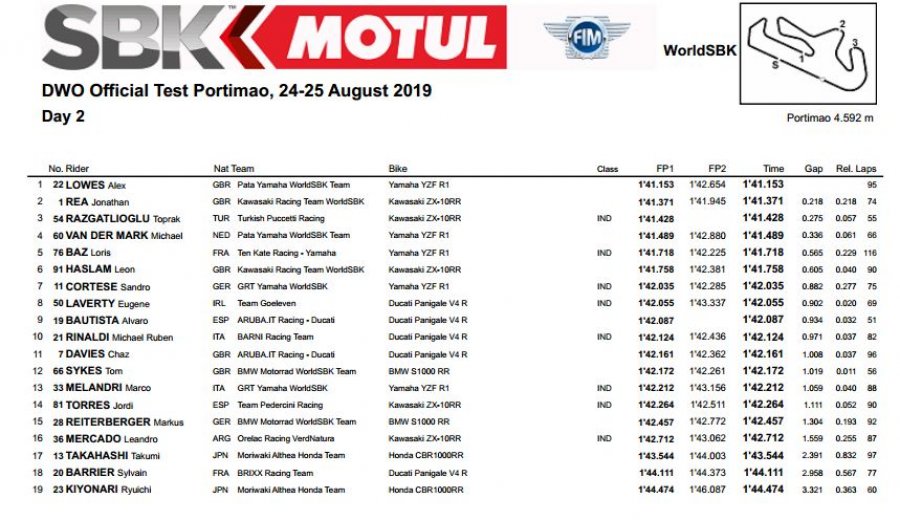