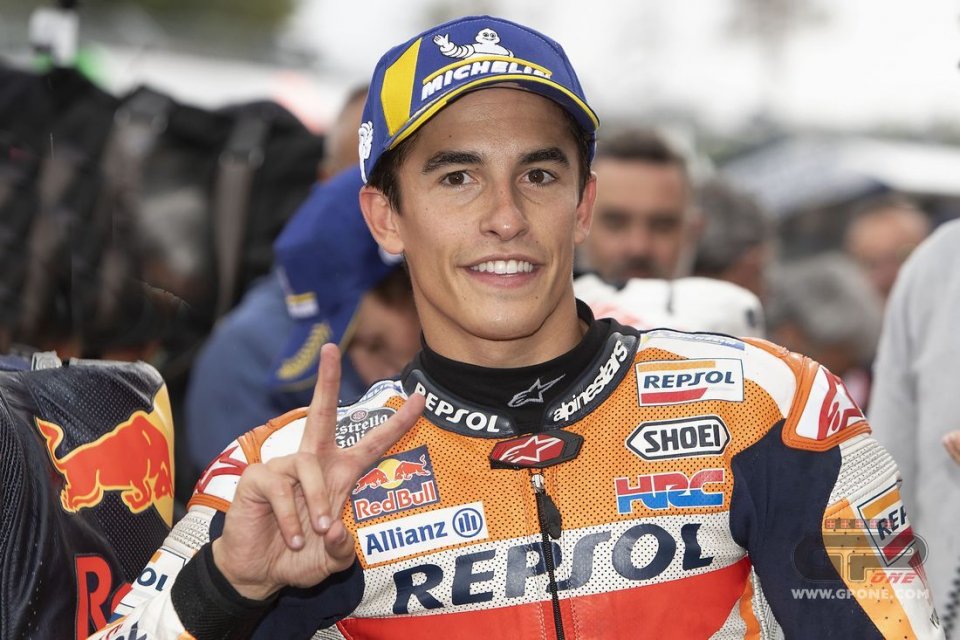 Researchers should study the Marquez family to find out what speed gene they have that joined their lucid madness one in Brno. Both Marc and Alex have turned the laws of common sense around by getting a pole position with slick tires on a track that was still wet. The older of the two brothers trimmed 2 and a half seconds from Miller, the younger settled for 2 on Lowes.

"During the Moto2 qualifying sessions, I was in the garage meeting with the engineers. We interrupted everything to watch," the MotoGP champion started explaining. "When I saw Alex put the slicks on I said: 'What's he doing?' And my team quickly replied: 'Shut up!'  He burst out laughing. "Seen from the garage, certain things always seem different."

Marquez is like that, he likes to aim high and take it all. Exactly what he did today.

"Ever since I was little, my weakness has always been to want too much even when it's not necessary. That's my nature," he admitted. "It's important to have people around you who can give you advice but, in the end, you make the decision and, when I'm on the bike, I only think about pushing. But  a first row today was enough. I took unnecessary risks. On the track, I thought about how much Emilio and Santi (ed. Alzamora and Hernandez, manager and chief technician) would be angry if I made a mistake," he smiled again, like someone who got away with doing mischief.

Actually, it went more than well. Like it did for Alex.

"My brother and I have the same ambition. To win the title. And we trained together this summer to reach this, " said Marc. "These mixed conditions were Alex's weak point until last year, but now he has confidence and is in excellent shape. He has to take advantage of this moment."

Undoubtedly, they are both on the right track, and today Marc has given his adversaries a show of strength.

"The distance I put between me and the second doesn't matter much. The distance between him and me tomorrow will always be the same. But it was nice to match Doohan's pole record. One of my first memories is the struggles between him and Criville on TV," he remembered. "I have to think about what I did today because I know I don't need to take certain risks. I should think about the championship. A front row would have been enough for me today. I didn't need to take that risk. Even if, in the end, I'm happy because I always like giving it a go."

Marquez also had an argument on the track with Rins.

"I went long at Turn 5. Miller had passed me, and I thought I'd get behind him because I knew he was fast. I didn't even see Alex ," he explained. "Then I went wide. Rins passed me and touched me. These things happen."

But it didn't end there.

"I overtook him on the last corner just because he braked early, and I didn't want to waste time. I had to enter the pit-box and mount the slicks," he continued. "Then, in the pit lane, there was a bit of a comical scene because he stood in front of me without giving me room. I don't know if he did it on purpose. Maybe he didn't see me, so I touched him with my hand."

Rins accused Marquez of having little respect for his opponents.

"I don't want to start a controversy. This episode is not important for me," he jibed. "I had (and I have other) things to think about at that moment, like the pole and the championship.The rest doesn't matter.

Tomorrow he'll have the chance to KO his adversaries, but he doesn't want to say anything.

"Today's pole doesn't count. I'd like a podium in the race," he said. "We didn't try much with a dry track. We all have big doubts on the pace and tires. Who do I expect to be fast? Yamaha with Vinales and Quartararo and definitely Dovizioso. We'll see what happens."

Meanwhile, one way or another, he'll be there.

Among the other teams, Webike SRC Kawasaki France Trickstar (EWC champions) and Moto Ain (Superstock champions) will use the French tyres
1 day 12 hours ago

He tells of the horrendous crash in which he nearly lost his life and recounts tales of gangsters, glamour models and glory in one of the most...
1 day 20 hours ago

VIDEO - The two brothers will wear special graphics to show their solidarity at this time. Helmets, gloves and boots will then be auctioned off for...
2 days 17 hours ago

The Dutchman: "In the afternoon I had some problems with front end confidence"; Razgatlioglu: "Too many things to try confused me; my head is...
3 days 5 hours ago