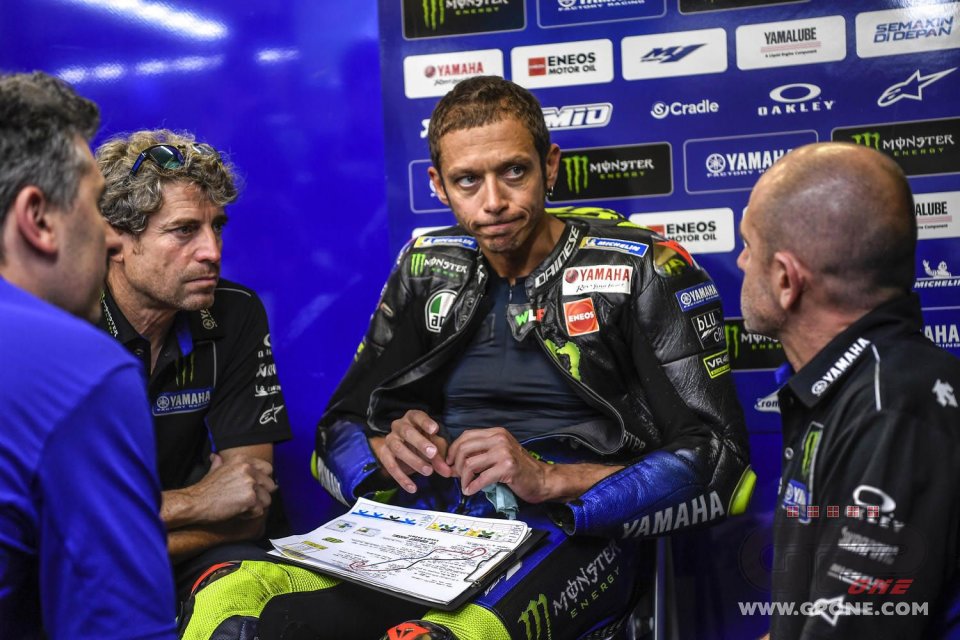 Valentino Rossi ended the Dutch Grand Prix at Assen in the worst possible way. After having experienced a bad qualification that relegated him to 14th of the startingin, many hoped to at least be able to see the real racer that is Valentino emerge during the race, a rider who was able to overturn the Sunday of a weekend that started out badly.

Unfortunately it didn't go that way in Assen because at the beginning of what would have been a good comeback in any case, Rossi fell at Turn 8 at a high speed, involving Nakagami. A decidedly negative way to close the GP, in a weekend where three Yamaha M1s closei in the top five, with the icing on the cake represented by Vinales' victory. Rossi received his third consecutive zero but, despite this negative entry, he is currently the best Yamaha rider in the standings in view of the Sachsenring.

"it's really a shame. The weekend was quite unlucky from the start," he said. "But the real problem is that I was too slow. Instead, we changed some things this morning, and it was going pretty well. We also chose the right tires, and I was really much faster than in practice. I was in full recovery. I was doing well when I got behind Nakagami. I tried to pass him at Turn 8, but I was a little bit off of the trajectory, and when I entered the turn, the front closed. Unfortunately, when I fell, I also dragged him down. I'm really sorry about that. It was entirely my fault. It seemed like the race could have gone quite well, but it ended immediately."

A difficult race for you, but triumphant for Yamaha.

"It's a great result for the team, and I'm happy for Yamaha. It's an important victory," he emphasized. "And, sincerely, Maverick deserves it because he rode in an impeccable manner since Friday. This result is important for me because having two bikes on the podium means that we have to work to be as competitive as they are."

What do you think when you see the other Yamaha riders that are so fast and you're having trouble?

"Honestly, I was very disappointed yesterday. I was decent in the morning while, in the afternoon, I was really slow. So, I really started thinking about everything. If I hadn't found today's improvement in the race, maybe I'd be really worried now. Instead, there's a ray of light, and we've found something good."

Does this M1 work well for you?

"We have to find something better for me. Three races ago, I struggled to win, and I'm still the first Yamaha in the standings despite three zeroes. It's not like I changed so much between May and June. But it's true that we're encountering difficulties, and sometimes we can't improve from a technical point-of-view. There are tracks where we have trouble with this set-up, and we're not fast enough. Today, I could have gone strong in the race. I did 6 tenths better in my first lap than my best lap during the test. I had just managed to do  1'34.0 with a clear road ahead, so I felt much more competitive than in the tests. Then I made a mistake but, when starting behind, it'isalways very easy to make a mistake, and I'm very sorry for Nakagami. On one hand, it's really a shame but, on the other, it's a big desire."

At least you didn't hurt yourself in the fall.

I'm fine. I was lucky because both Taka and I took a bad blow. It was really hard. After the fall, I talked to him. He told me he hit his head, but luckily everything seems ok. I'm just really sorry."

You haven't gotten three zeros in a row since 2011 with Ducati.

"Three falls in a row are a real problem, also because they took place at Mugello, Barcelona, and Assen, which are among my favorite tracks. It's also a real pity for the championship, but the important thing is always trying to find a solution to be faster. Here, like at Mugello, I suffered a lot at the beginning because I didn't have enough speed. Yesterday, I was worried, but I was fast today, and I think I could have already been competitive. Fortunately, there's another race immediately at the Sachsenring, and let's see how it'll go there, since we may have found something to be more competitive."

But sometimes you have a doubt that the problem could be the rider?

"The problem could be the rider. Maybe yes, maybe no. I think the situation is vast to explain. But Yamaha was really strong here. In Barcelona, there was one on the podium, here actually two. We need to straighten things out."

VIDEO - The flames spread during a day of free practice, no harm to people or structures
6 days 3 min ago

The reigning champion wins race 1 but ends up on the ground in race 2, giving the Suzuki rider his first career success. A 4th and 7th place with a...
6 days 6 hours ago

A non-stop week for the Ducati rider, beginning with the Misano tests, then a bike ride to Tavullia, and today on the Dorno track
1 week 42 min ago