A few months ago, two days of testing were officially announced for the MotoGP riders on August 19th and 20th at KymiRing. The new circuit will mark the return of the MotoGP in Finland starting next season.

However, the summer tests are at risk because it is unlikely that the works on the new track will end in time for the scheduled tests. The circuit is 4.6 km long, with 18 turns, and is located in Kymenlaakso, just over 150 km from the capital, Helsinki.

The tests in August would be useful for riders so that they can learn the new track and for Michelin to test the most suitable tire solutions. However, the track may not be ready for that date, and the two days of tests could fall through, even if tickets for the test are already being sold on the website of the Finish circuit. 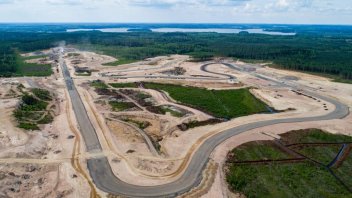 The KymiRing is ready, test in Finland at the end of August

"I still have to get to know the new M1 better, but I already feel good on the bike." Morbidelli: "I don't have a factory M1? I will make up the difference in cornering"
15 hours 26 sec ago

Dorna signed from 2022 to 2026. The Ricardo Tormo circuit will alternate with the others on the Iberian peninsula but will remain the last race of the year.
3 days 18 hours ago

KTM's sports manager at the gates of 2020: "This is the highest point of engineering applied to motorcycling and has taught us to go beyond our limits"
5 days 18 hours ago