Who would ever have said that there are similarities between Marquez and the Ducati? Marc himself says so, commentating on the case against the spoon used by the red team.

“Ducati always goes to the limit in the field of technology, as I do on track. But the important thing is that it is us who have won the triple crown in recent years” he smiles, recalling his recent riders', manufacturers' and team titles.

Aside from this, he isn't giving much away, preferring to avoid expanding on the spoon.

“I don't know about the technical side, but I know Honda and they are no doubt trying to understand how the appendage works and how it can improve performance - assures Marquez - Everyone will definitely try something similar now, but I don't think it will change things by many tenths”.

Rather than looking to the future, the Spaniard prefers to consider the recent past, or rather his podium in Qatar.

“It went very well. I usually struggle at Losail, while Termas suits my riding style. I'll try to remain focused, to give 100% and be a frontrunner on Sunday. I feel ready whatever the conditions, or at least I'll try to be”.

There are two uncertainties though, namely the Honda's performance and the rider's physical condition.

“You can never know if you have the best bike, but I know I'm on the best team and in the best situation and I believe in what I have. The Qatar podium was an important result, over winter we worked differently but achieved the same level and that's what counts”.

His shoulder episode appears to be behind him.

“It wasn't a problem in Qatar. In recent days I've tried to get back to my normal training but it's still too soon to ride MX. I'm able to ride well but then experienced some pain. It's a discipline that puts your body to the test, while I have no limitations when riding a MotoGP”. 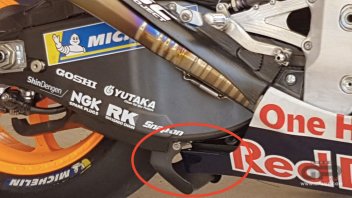 Englishman suffered a fracture and dislocation of the right shoulder. The British rider suffered an injury during a fall at this week’s private test...
2 weeks 30 min ago