If the first day of testing for Tom Sykes was positive, the second can be described as almost triumphant. The Brit and his BMW have, in fact, left the entire squad behind (except for Bautista), already demonstrating to be a force to be seriously reckoned with on the track when it comes to a podium position. An unexpected result, but one that makes the Bavarian company, and number 66, very happy.

“We’ve improved in every single session,” says Tom , “and I can say that we’re on the right track.” I’m happy and impressed by the structure that I had at my disposal for these two days of testing. I’m satisfied and psyched to start the championship this weekend.”

Tom traces the path to follow to further improve but without skimping on nice words for the team and the work that was already carried out.

“We have to find something more on the straight, while in the mixed portion we’re fast, and the lap time is certainly positive. The tires seemed to hold up well during the race, and this allowed us to concentrate on the development, so we can make several changes on the bike, and we collected a lot of data that could be useful later.”

Given the results, it’s difficult not to talk about a possible podium already in the first round, to celebrate the return of BMW among the derivatives in series.

“It’s early to say, but both the guys on the team and I know that I’m competitive.  We want to give the most we can during the race weekend, which is always different from doing laps in the tests, and we’ll see how it goes. We found a good base from which to start, and I like this. Friday and Saturday we’ll understand if our pace will allow us to stay up there with the top riders.” 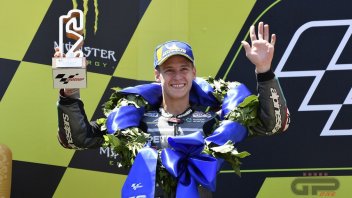 Until May 29th, you'll be able to buy some of the best shots taken during the World Championship. All proceeds from sales will then be donated to the...
4 hours 4 min ago

The two first events of the season have now been authorised. The first race week will take place at the Circuito do Estoril, followed by the...
8 hours 29 min ago