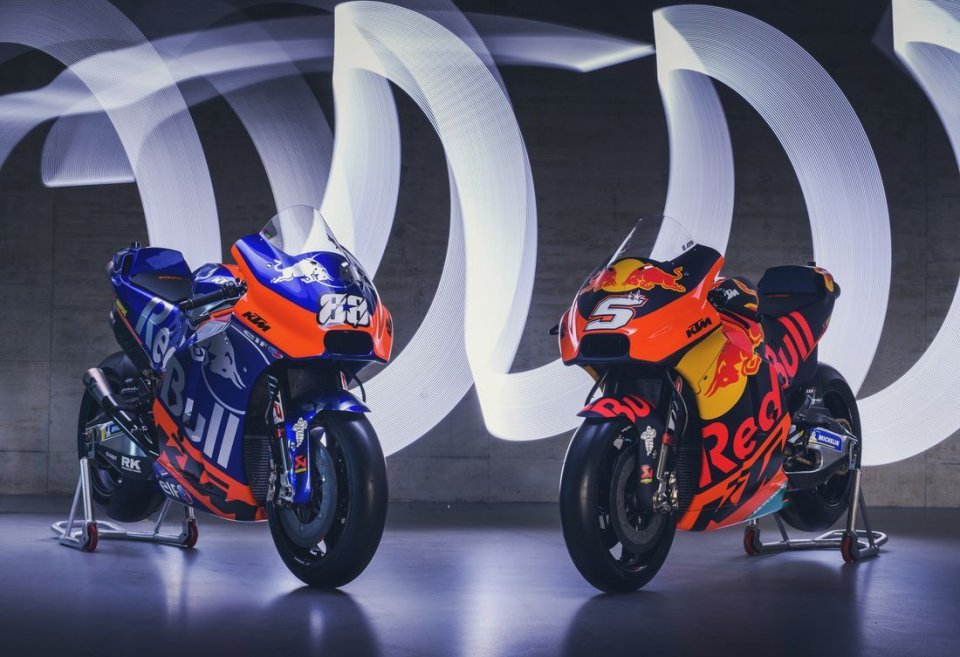 At Mattighofen, its historic location, KTM has decided for a home advantage and has reunited all its riders and teams, which will race with its motorcycles in the World Championship. It's a very crowded stage because the Austrian manufacturer is the only one in the world to compete in all three classes: Moto3, Moto2, and Moto3. Also, starting this year, it has further expanded with the arrival of Tech3, a satellite team that will receive the same technical treatment as the official team.  The presence of the French team at Mattighofen is another sign of this close collaboration, which is what the Ajo team has been doing for years in Moto2 and Moto3.

Today was an opportunity to show the bikes' new colors. The official RC16, like its sister bikes in the other two classes, does not differ much from the livery that is well-known by its fans, featuring its sponsor, Red Bull. Instead, the Tech3 graphics clearly resemble those of the Toro Rosso team that races in Formula 1. An almost electric blue with the sponsor's white logo and a splash of KTM orange.

Aesthetics aside, the Austrian manufacturer will have to prove to be fast in MotoGP. The two teams mix experience and youth. In the official one, we find Pol Espargarò joined by the new arrival, Johann Zarco, while Tech3 lines up newbie Miguel Oliveira alongside Hafizh Syahrin.

In Moto2, the race for the title is a must, after being defeated by Bagnaia last year. Brad Binder starts out as a favorite with the Ajo team colors and will be joined by the Moto3 world champion, Jorge Martin, while Marco Bezzecchi and Phillip Oettl will be on the KTMs of the French team.

Finally, with Moto3, the Ajo team plays with just one top player: Can Oncu, the young Turkish rider who won the Valencia GP for his debut in the World Championship, becoming the youngest winner of a race in history.

Now enjoy all the photos of the new KTMs.