For just a few hundredths of a second, Maverick Vinales did not claim the title of fastest rider ever in Sepang. Shortly before the end of the second day of testing, the Spaniard from the Yamaha team was the first (and only) to fall under the 1:59 mark and his 1:58.897 time was only 67 thousandths of a second slower than Lorenzo's unofficial record reached on the Ducati last year.

The last 10 minutes of testing were a general qualifying test with practically all the riders mounting new tires to take advantage of a track that was in excellent condition and at cooler temperatures. Those who were left out of the game among the big names were Dovizioso's and Petrucci's official Ducatis, Crutchlow, and also Valentino who had to abandon his attempt. Rossi returned to the pit, gesturing and indicating that his rear tire had no grip.

However, Yamaha can still celebrate thanks to its Top Gun who trimmed a good half second off of Rins's Suzuki, definitely going from a surprise role to a certain one. Ducati closed the first virtual row with Miller, who climbed the ranks because of new tires after being out of the top ten for most of the day. However, with his morning time, it was indicative that Dovizioso was only 45 thousandths of a second from the Australian.

Honda's best rider was Crutchlow (who mounted his rear brake lever onto the handlebar, in order to remedy his leg problem, which has not yet healed) with the 5th ranking time, 4 thousandths of a second from Dovi. Rossi had to settle for 6th position, since he had no possibility of improving, ahead of Rabat, who was always convincing on the flying lap.

Due to his shoulder, Marquez ended his day well in advance (with only 37 laps) and 8th position ahead of Petrucci and Nakagami, with the Japanese more than a second away from the top.

In KTM, something seems to have changed. For the first time, Zarco was the best with the RC16. The Frenchman finished 11th (at 1:076), while his teammate, Pol Espargarò, at 4 tenths and 6 positions behind. Syahrin has a long way to go. Third to last, in front of the Yamaha and Suzuki testers. There is still a lot of work to do in Aprilia, and Aleix Espargarò has not managed to get past the 13th position, while Iannone was 18th. There were problems also for Morbidelli (who slipped in the morning, like Crutchlow), only 15th. Franco mounted a new tire in the final, but the improvement was very slight.

Among the new riders, like yesterday, the best was Bagnaia, who managed to get under two minutes. Pecco, who at the end of the day tried out the fairing used on the official motorbikes, finished 12th. Not far behind was Quartararo, 14th, while Oliveira and Mir are still struggling, respectively 20th and 21st.

PACES. So far, the results of the tests in the flying lap but, as the drivers love to repeat, what really matters is the race pace. Ducati is the team that has been more involved in this sense. In the afternoon, Dovizioso and Petrucci went out together for two long runs of 10 laps each. Andrea was pulling in the first, Danilo in the second (and for a few runs, Valentino and Vinales joined in).

The two riders in red showed they were in synch and proved to be very consistent, managing to keep a pace of about 2:00 and a half. Moreover, these tests say a lot about how Ducati is working, where it seems to have already found a good foundation and is mainly thinking about the races.

Even Vinales performed in a long run of 9 laps and was under 2:00 for 7 times. Once he came very close to this limit, but he had a slight slip up in one run. In short, the day was marked by the Spanish Top Gun, in every sense. 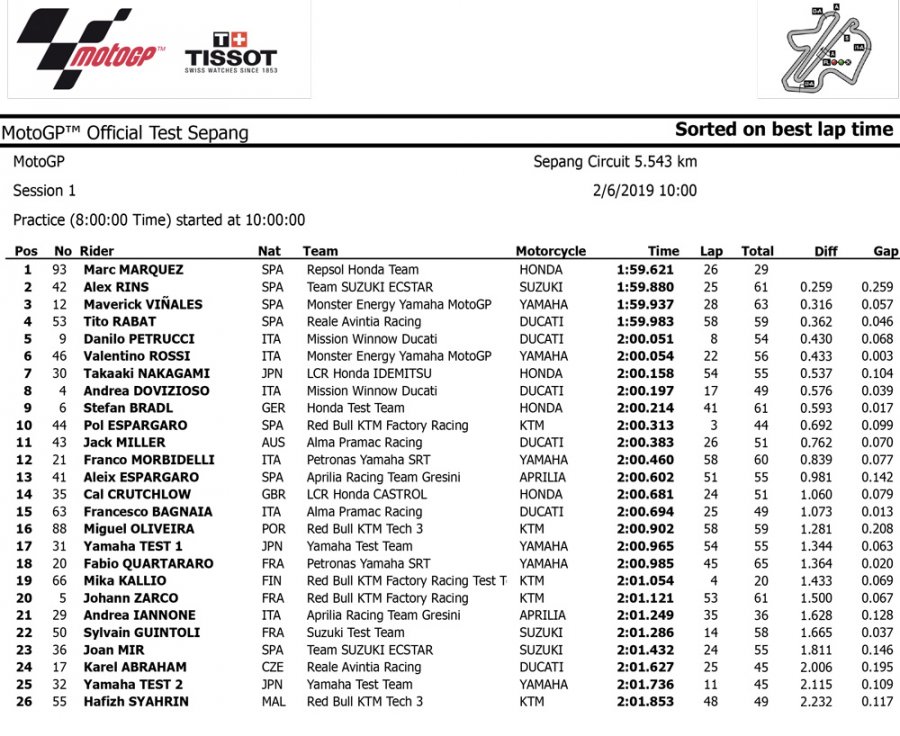 "I still have to get to know the new M1 better, but I already feel good on the bike." Morbidelli: "I don't have a factory M1? I will make up the difference in cornering"
14 hours 59 min ago

Dorna signed from 2022 to 2026. The Ricardo Tormo circuit will alternate with the others on the Iberian peninsula but will remain the last race of the year.
3 days 18 hours ago

KTM's sports manager at the gates of 2020: "This is the highest point of engineering applied to motorcycling and has taught us to go beyond our limits"
5 days 18 hours ago