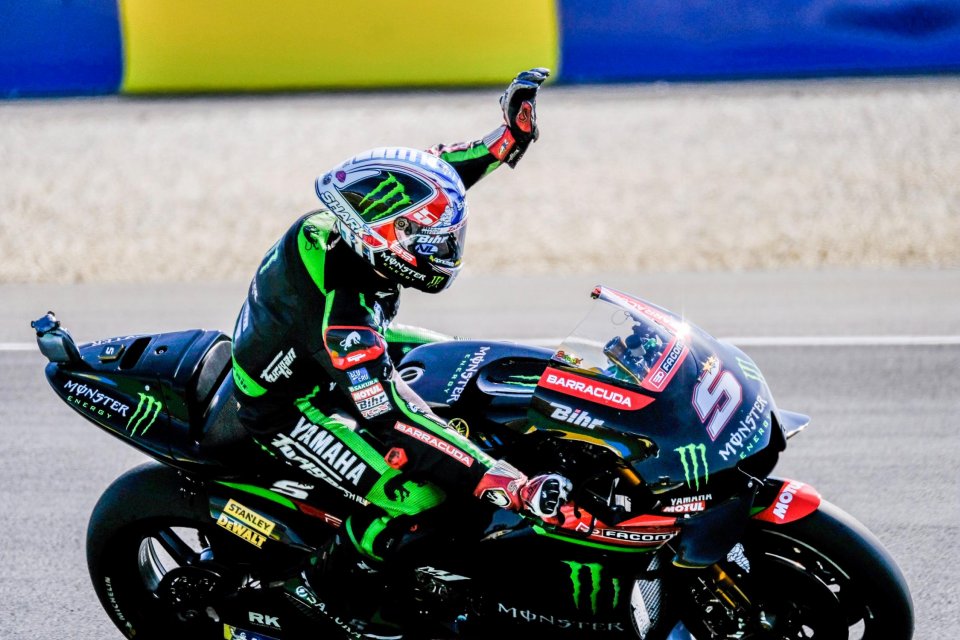 The grandstands in Le Mans can rejoice, because their hometown hero was perfect. In fact, Johann Zarco took pole position (his fourth in the category) in France, able to start from the front row for the ninth consecutive time. His was an admirable lap, aided by a soft tyre on both the front and rear and one with which he managed to stop the clock at 1'31"185. “A beautiful sensation, very emotional. I am almost surprised at such an ovation. I wanted to be fast but I didn’t think I would be that fast. I need to capitalise. The Yamahas are strong here. We are fast with both the new and used tyres, which may come in handy tomorrow.”

The rider who tried to rain on number 5’s parade was Marc Marquez, the only to put the medium on the front besides Pedrosa who, however, had to settle for a tenth place time behind his rival. “He did a great lap. I tried to push, but I made a mistake. Tomorrow we will see how to manage the race. Dovi is not on the front row, but I think he is the most dangerous adversary.”

Closing out the front row is a great Danilo Petrucci, able to get past the obstacle of Q1 to then earn a spot on the front row that is as important as it is useful. “Everyone tells me to stay calm in this moment. I never am, so just imagine right now. Today with the new tyre I struggled, but in the afternoon I got angry and I really wanted this result, thanks in part to a step forward we made on the bike. It isn’t easy to do all this going through Q1. I have learned that in MotoGP you must never give up.”

The Italian snatched the front row from Andrea Iannone (+0.269) who, in any case, is clearly improving from yesterday, whereas the second row is completed by the Dovizioso – Lorenzo Ducati duo; so it’s three ‘reds’ in the first six spots – an encouraging sign in view of the race tomorrow. Conspicuously missing, on the other hand, are the factory Yamaha bikes, forced to follow from behind with Maverick Viñales 8th and Valentino Rossi 9th, both behind Jack Miller.

Dani Pedrosa was in even more difficulty, in 10th place and hindered by physical problems (he also went through Q1) as was Alex Rins, 15th and remaining in Q1, but the unluckiest of the day was undoubtedly Cal Crutchlow (13th). The English rider was victim of a highside on turn eight during Q1, taken from the track on a stretcher. “Cal never lost consciousness – doctor Zasa of the Mobile Clinic explained – and he is now at the medical centre to have the pain in his hip assessed. Once this check has been completed, we’ll see whether or not to take him to the hospital for further tests.”

A crash in the early moments also compromised Aleix Espargaró’s qualifiers. In any case, the Spanish Aprilia rider managed to get back in the saddle to finish in 12th place behind Tito Rabat, improving consistently astride his Avintia Ducati.

Moving on down the rankings, a good 14th place time by Syharin stands out on his Tech3 Yamaha, while Morbidelli was 16th with the only consolation being that he was the best satellite Honda rider. KTM also did poorly, with Smith 17th and Pol Espargaró 18th. Also noteworthy was Alvaro Bautista’s crash in Q1: the Spaniard is 20th behind Nakagami and ahead of Luthi. Last row for Redding, Simeon and Abraham. 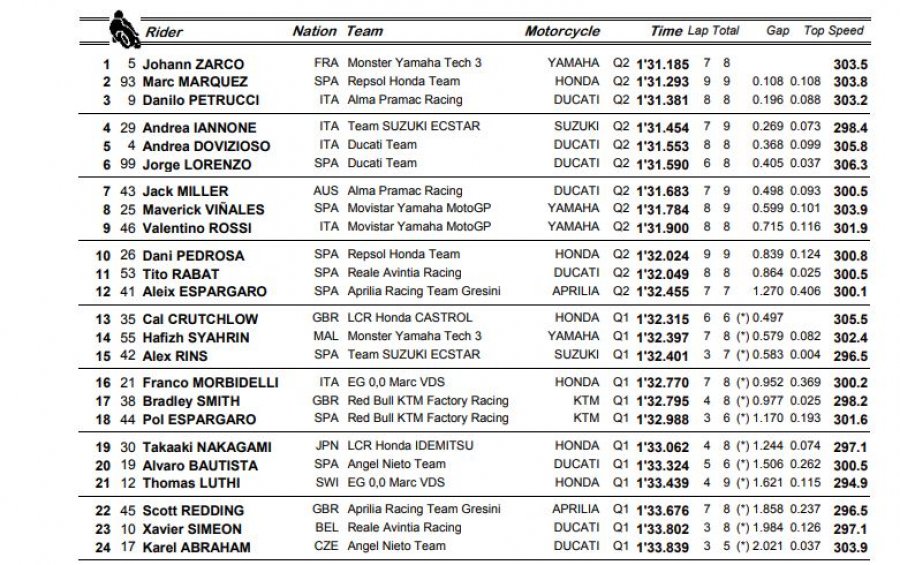 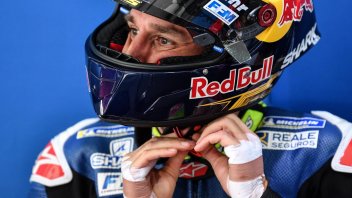 For the Austrian and Styrian Grand Prix, a new medical service for the riders is scheduled for the next two weeks
23 hours 10 min ago

Team manager Jansess: "it's still not exactly clear what's wrong with Jesko." Maybe he'll be able to race back to Misano
1 day 2 hours ago

The Covid-19 pandemic remains a source of concern in Japan. As a result of stronger restrictions on entry in Japan, international teams and riders...
1 day 6 hours ago

The former 350 world champion, official Yamaha and Honda rider, will take part in the 'Motegi Endurance Race' on 23 August riding a CBR250RR. '...
2 days 19 min ago

After having made contact with Josh Brookes, the Race Direction decided to disqualify the Honda rider from Race 3. He'll be starting last at...
2 days 3 hours ago

The venue for the last Grand Prix of the 2020 season has been unveiled, and it'll take place on one of the most spectacular tracks in Europe. The...
2 days 6 hours ago

In Race 2 the domination of the Irwin brothers with Honda Racing UK continued. Ducati returns to success with Bridewell in Race 3. Controversy in the...
3 days 6 hours ago