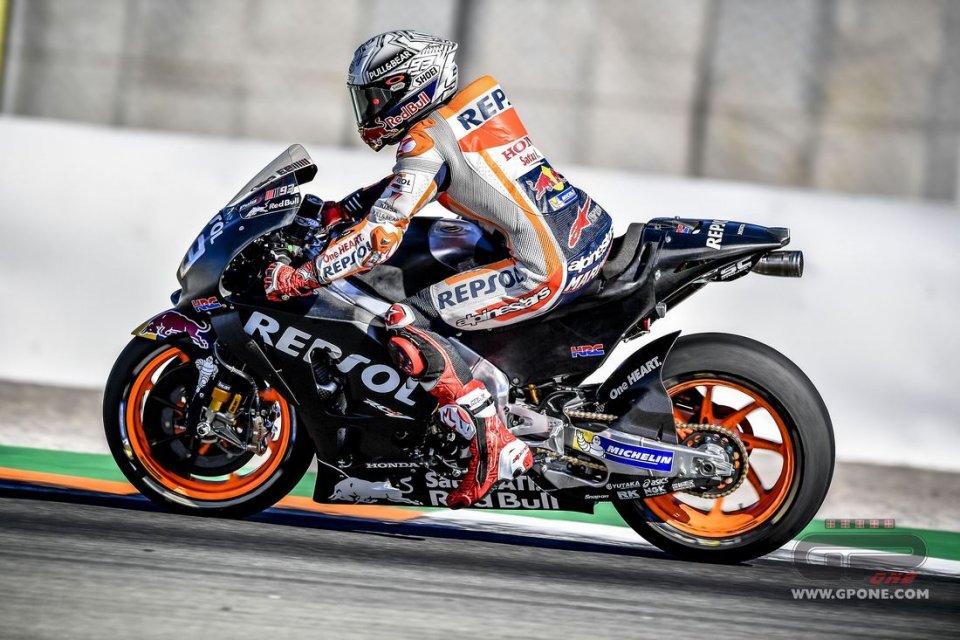 Marc Marquez wanted to close 2017 on a high. On the second and last day of testing, the Spaniard showed everyone how it's done at the Ricardo Tormo track, setting the fastest time of the day, a good four tenths quicker than his closest rival. #93 carried out a comparison between the 2017 bike and the new Honda prototype, setting his best time with the current bike, which featured some of the new 2018 frame elements.

“I got a lot of information from the bike today, though we have a lot to do – starts the six-time champion - we've been able to set out a work schedule ahead of the Malaysia tests. I'm pleased with how day two went, as our pace was good and I had the right confidence”.

“There were some problems with the engine, but that's normal – reveals #93 - we'll re-test everything at Sepang, also because we won't be at Jerez. Only Cal Crutchlow will test there, while we await the January tests, seeing as we don't have other new parts to develop”.

Marc will go to Jerez anyway.

“As you know, my brother will stand in for Luthi on the Honda, so I want to be there. It's his first time and I'll try to give him some advice”.

Marc turns back to the tests.

“I was able to be competitive right from the start, while staying inside the parameters I'd set myself. We'll need to work on the frame and electronics of course, but the engine gave me a good impression”.

Marc then speaks about Suppo's departure from the HRC team.

“I worked well with Livio, not just on track. I'm sorry because we had a good relationship and also won several titles together. He's decided to make a change, but I've always had the utmost faith in this team and know we'll do our best”.

Completing Honda's 1-2 on Tuesday at Valencia is Dani Pedrosa. The Spaniard closes behind his team-mate, despite a 0.4 second gap.

“I started out with the 2017 Honda today before moving to the new prototype– comments #26 - the set-up as different, and also the mapping, suspension and geometry. So I had to build confidence in terms of the tyres too. We made some progress, but there are still various aspects I need to understand”.

The Spaniard's work didn't end there.

“I tested the new Michelin tyres and the fork. It's difficult to draw conclusions as we didn't have much time. I'm happier today than I was yesterday though”.

As for the comparison between the two bikes...

“I definitely felt comfortable on the 2017 Honda, sensations were different in fact, I had to be more careful with the new bike”.

The young American rider will return to the UK domestic championship with the PTR team. Riding the brand new 765, he will have the opportunity to...
14 hours 42 min ago

He won two world titles with the Kreidler 50, losing one title to the Spanish star in a points draw
2 days 44 min ago

Only four public camps are available to the general public in the new year. Those who attend the racer camp must have previous racing experience.
6 days 21 hours ago