Johnny Rea hoped to close the Magny-Cours race weekend in the best possible way, after having won his third world title yesterday. In race 2 however, the Northern Irish was forced to retire, having hit Laverty's Aprilia with his right foot, just as his rival crashed to the ground. Fortunately the Kawasaki rider hasn't broken anything, and remained in the garage where he watched the rest of the race with ice on his foot.

"The good news is that nothing is broken - said the number 1 - I was just in the wrong place at the wrong time and hit something really solid on the other bike, I had no choice but to stop."

Johnny cannot help but be disappointed.

"Without the incident that put me out of the race we could have been fighting for the win. My pace all weekend in the dry has been a little bit of a step ahead of the others. Wet or dry we have set the level this weekend."

So it was left to Tom Sykes to fly the flag for Kawasaki, scoring a seventh place through gritted teeth, but awarding the squad the team's title as a result.

"Today we can celebrate another important achievement after yesterday's win - said #66 - It is a big team effort. The team has two good riders inside the camp, it is a great team who give us a great motorcycle."

Tom definitely hoped for more, but it's a weekend to remember if we consider that he was undergoing surgery just two weeks ago.

“"We chose a harder rear tyre today, because of the temperatures, as the softer compound seemed more risky. Unfortunately though the tyre struggled to get up to temperature and I was lacking grip throughout the whole race. A pity about the result but I'm fairly satisfied." 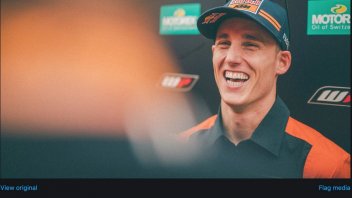 The reigning champion started has started 2020 in the best possible way, heading his teammate Jake Gagne. Race 1 at 22:00 on Eurosport
2 hours 14 min ago

In a video on You Tube, the driver defended his reasons but confirms the end of his experience with Audi in the Formula E
3 days 12 hours ago

It was decided by the Board of Directors via video conference call. Previously the FIM-Dorna contract provided for a minimum of 13 Grand Prix. In F.1...
5 days 5 hours ago

An embarrassing moment for Audi Formula E driver Daniel Abt who, during the virtual race in Berlin, had an eSports professional race in his place:...
5 days 23 hours ago