There is nothing to be done about Johnny Rea. The Kawasaki rider didn't hold back in second practice, shooting straight to the top of the timesheets with a best of 1’37”489. A performance that sees him improve by four tenths on his best time of the morning. The Cannibal is making it very clear that he intends to lift the championship trophy this weekend, completing the job ahead of time.

What is striking is the gap between him and his closest rival, in this case Michael van der Mark on the Yamaha (+0.439), four tenths back. The R1 is followed by the Ducatis of Marco Melandri (+0.477) and Chaz Davies (+0.491), with the Italian sneaking into third place ahead of his team-mate on his final attempt. It little matters though, as the half second gap says it all.

In the final minutes Lorenzo Savadori (+0.527) was able to rise up the timesheet, closing in fifth place ahead of Xavi Forés on the Ducati  (+0.541) and Leon Camier on the MV Agusta (+0.542), the pair separated by just 0.001 of second. The Brit was unable to improve on his morning's best time though, remaining on 1’38”032. Ramos, fourteenth, and West, seventeenth, also failed to improve on their earlier results.

Back to the afternoon and, in eighth place is the Yamaha of Alex Lowes (+0.644), followed by the Aprilia of Eugene Laverty. A step forward for Tom Sykes (+0.728) who, as we know, is riding at Magny-Cours with a fractured left little finger . #66 finishes tenth, as he did in FP1, but improves on his time by six tenths.

The Aprilia of Mercado and the BMWs of Torres and De Rosa close outside of the top ten, as does the Honda of Davide Giugliano, just fifteenth and more than two seconds from the front (+2.209). 21st for Jake Gagne, called upon to replace injured Bradl. 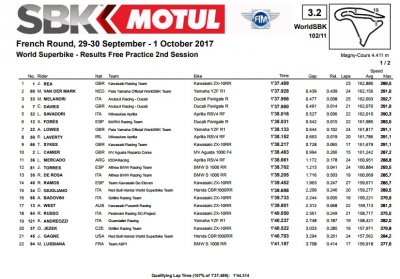