All of the MotoGP riders know the Sepang racetrack like the back of their hands, considering that, as well as the race, the Malaysian track also hosts winter tests. But this time, they will face a slightly different layout. Jarno Zaffellis' Dromo company was responsible for carrying out the track updates.

The resurfacing was just one of the many operations carried out in order to make it safer and more spectacular. The potholes resulting from car races have been removed, track draining has been improved and certain run-off areas have been modified.

There is basically no point that has not been analysed and improved.

The turn that received most attention though is turn 15, the last one leading onto the straight. In this case, the incline has been modified in order to: prevent the formation of channels in case of rain, reduce speed through the turn and, consequently, maximum speed along the straight, increase the show in that this is the final point at which to make a pass.

As we wait to see the riders in action, we leave you with this video that shows the modifications made to the turn with a photo gallery of the works completed. 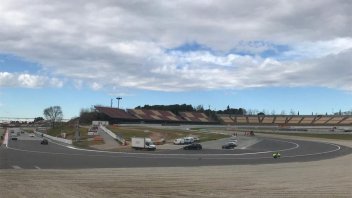 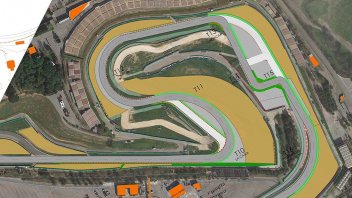 “The Formula 1 is a bigger organization. Everything happens faster, but the riders have the same attitude. Alonso returned here because he’s hungry...
14 hours 47 min ago

Valentino: “I remember him when he was racing. As a team manager, he was my great rival in the 250 with Capirossi and in the MotoGP with Gibernau and...
21 hours 40 min ago