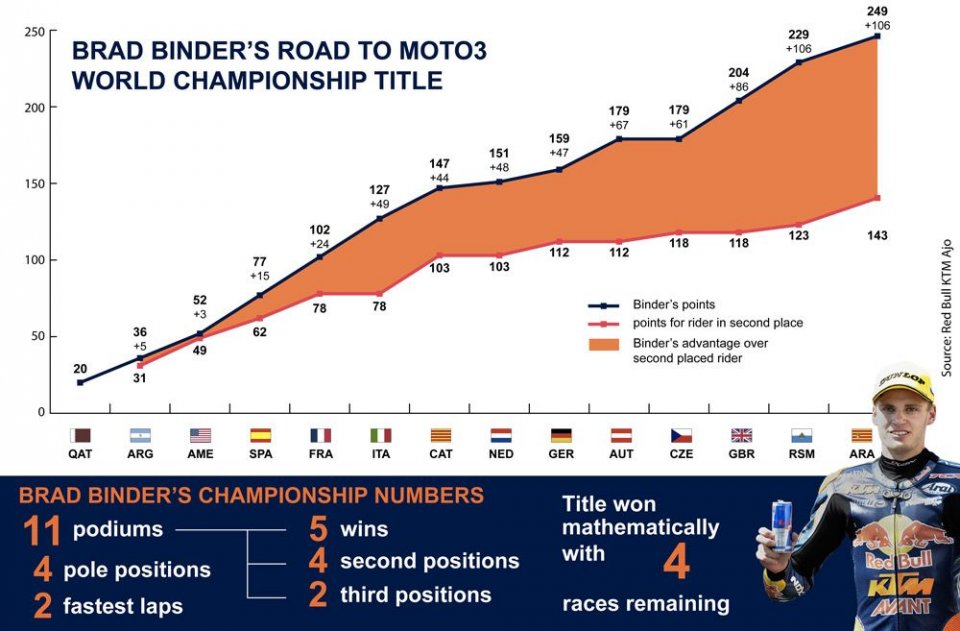 Brad Binder simply dominated the Moto3 championship and the statistics show it. The graph above shows the South African's incredible climb to success, where his leadership was never called into question.

Winning the title in a category as unpredictable as Moto3, with four races left in the season, is no simple task. In fact, it has never been done before.

Let's have a look back at Brad's magic year with some numbers and curiosities.

- He is the third South African rider to become World Champion in the Moto3 class after Jon Ekerold and Kork Ballington.

- He is the first South African rider to win a title in any class since Jon Ekerold in 350cc in 1980.

- He is the first South African to win a race in any class since Jon Ekerold at Monza in the 1981 350cc round.

- He is the first South African to win the title and a race in the lower cylinder class.

- At 21 years and 45 days old, Binder is the youngest South African to win a World Championship.

- He won the title with four races remaining of the season, something that had never happened before in the lower cylinder class since the current points system was introduced in 1993.

- Binder took the lead from the second round of the season in Argentina, never relinquishing it.

- At the Spanish GP, Binder achieved the greatest comeback ever seen in a MotoGP race, winning from 35th position. 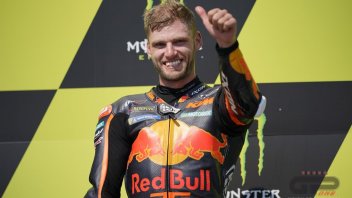 Binder: "Winning's a shock! It all seems crazy to me."

The former 350 world champion, official Yamaha and Honda rider, will take part in the 'Motegi Endurance Race' on 23 August riding a CBR250RR. '...
1 hour 36 min ago

After having made contact with Josh Brookes, the Race Direction decided to disqualify the Honda rider from Race 3. He'll be starting last at...
4 hours 47 min ago

The venue for the last Grand Prix of the 2020 season has been unveiled, and it'll take place on one of the most spectacular tracks in Europe. The...
7 hours 32 min ago