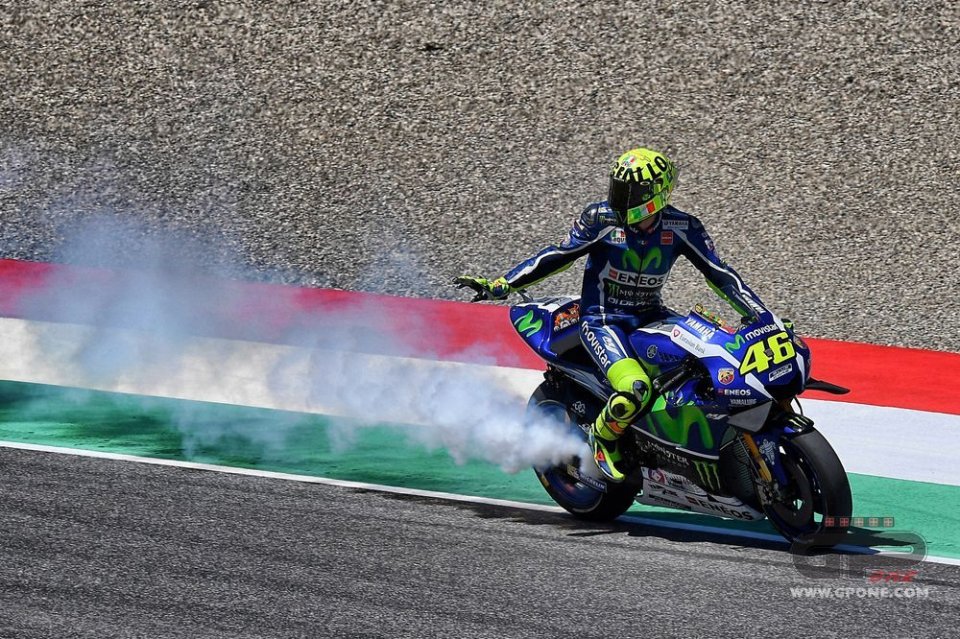 A cloud of smoke snuffed out hopes and dreams, covering the yellow that coloured Mugello. Not even nine laps and then Valentino Rossi had to abandon his M1 trackside, engine blown, as silent as the fans that had been cheering their hero on just a few seconds earlier.

“At Mugello every emotion is amplified and this is an all-around disappointment” the Doctor broods.

Two engines blown in the space of a few hours is a warning bell…
“I was very unlucky. The problem is the same as the one Lorenzo had. The difference is that it happened to him in warm-up and to me in the race.”

What was the problem?
“We’re thinking something to do with this batch of engines, maybe connected to the materials or the assembly. Our engineers are checking. It definitely wasn’t caused by overheating.”

The engines are subject to quota. Are you worried?
“Not too much, because we’ve only punched 3 engines so far, so the problem can be resolved. Faults like this do not happen often to Yamaha. The last time I didn’t finish a race due to a technical fault was in 2007 at Misano.”

The wild line remains…
“And it is very serious because 37 points is a big gap. At Austin I had made a mistake, but Lorenzo and Marquez had made a mistake at the beginning of the season. Today, on the other hand, something else happened. As the English say: shit happens (he laughs)”.

It could have gone differently…
“It has been a long time since I’ve won at Mugello. Today, on the other hand, I had a good pace and I could have battled to make it happen. The atmosphere was fantastic. Seeing the entire track painted yellow during the warm-up lap was an emotional experience.”

In the first laps it seemed like you were unable to overtake Lorenzo…
“To be honest, I only tried to attack him once at the San Donato, but I went long. The second time wasn’t an attempt to overtake, but rather a problem with the clutch, maybe a warning sign of the problem with the engine. I lost contact, but I was able to catch back up with Jorge in a few turns. I was probably faster than him by a few tenths.”

Better to look at the positive aspects?
“It’s the only thing to do. This year I’m faster than I was last year, even in practice. I struggle less than Lorenzo and that lets me attack, instead of racing to limit damage. That’s a big difference.”

After a negative period with Puccetti Racing, BSB opens its doors to the Spaniard for a second time. Talks are underway, in particular with OMG...
46 sec ago

The Team Estrella Galicia 0,0 Marc VDS rider has completed a successful procedure to treat compartmental syndrome in his right forearm
21 hours 12 min ago